David Comissiong | In defence of the humanities 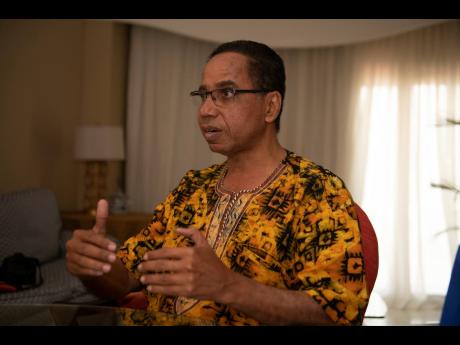 Well, what is new? A few years ago, I was forced to warn the people of Barbados that there was an “open conspiracy” in our country to debunk, sideline, and discourage the study of subjects such as English literature, history, music, law, philosophy, and cultural and religious studies – subjects that are components of the broad sphere of knowledge known as “the humanities”. Fortunately, with the change of government in Barbados in 2018, there has seemingly come a change in direction, and the Barbados Ministry of Education is now undertaking such projects as developing a Caribbean history syllabus for primary schools.

But even as I celebrate the new, more enlightened governmental policy in Barbados, I remain fearful about signs across the Caribbean that suggest to me that there is a very determined and influential lobby comprising members of parliament, political party policy gurus, educators, and business persons who, collectively, are intent on convincing Caribbean people that

1. English literature and history are irrelevant and unimportant subjects that can be dispensed with;

2. our students should be directed away from the humanities and towards the so-called STEM subjects;

3. the classic texts of European literature and philosophy – the works of Shakespeare and Plato, for example – are totally irrelevant to our contemporary needs;

4. there is no value in exposing our students to texts that are written in our Caribbean vernaculars or “nation languages”.

Well, let me – in this article – undertake the dual responsibilities of publicly telling these would-be opinion makers that they are wrong and also warning the Caribbean people that if they allow themselves to be seduced into following the myopic advice being pushed at them, they will end up doing irreparable damage to their nations !

WHAT ARE THE HUMANITIES ALL ABOUT?

But as we set out to explore this topic, let us begin with a clear understanding of what the subjects known as “the humanities” are fundamentally about.

The humanities are those branches of learning that place “Man” and his or her interests and development at the centre of its focus. The subjects that comprise the humanities are language (both modern and classic), linguistics, literature, history, law and jurisprudence, philosophy, the theory and practice of the arts, archaeology, and those aspects of the social sciences that have humanistic content. These are all subjects that, traditionally, have been distinguished from and often juxtaposed with the natural sciences.

To those superficial thinkers who seem to believe that there is little or no place for the humanities in our technology-driven age, let me remind them that this argument over the relative merits of the humanities and the natural sciences was conducted several decades ago and concluded with an acknowledgement of the central importance of the humanities.

One eminent scholar who – way back in the 1970s – resolutely and convincingly put the case for the “humanities” was the late great economist Dr E. F. Schumacher of Small Is Beautiful fame. Indeed, Dr Schumacher famously and publicly clashed with the eminent British scientist, Lord Snow, over this issue many years ago and articulated a telling and convincing argument in favour of the humanities.

You see, Lord Snow – the British establishment’s champion of the natural sciences – had publicly bemoaned the fact that the great majority of citizens knew nothing about the “Second Law of Thermodynamics”, a piece of scientific knowledge which, according to Lord Snow, was the scientific equivalent of the works of Shakespeare, thereby suggesting that the people were culturally and intellectually deficient. And this is how Dr Schumacher answered Lord Snow: “The Second Law of Thermodynamics is nothing more than a working hypothesis suitable for various types of scientific research. On the other hand – a work by Shakespeare: teeming with the most vital ideas about the inner development of man, showing the whole grandeur and misery of a human existence. How could these two things be equivalent? What do I miss, as a human being, if I have never heard of the Second Law of Thermodynamics? The answer: nothing. And what do I miss by not knowing Shakespeare? Unless I get my understanding from another source, I simply miss my life.”

Of course, for “a work by Shakespeare”, we could substitute a host of Caribbean texts, inclusive of In the Castle of My Skin by Lamming, The Arrivants by Kamau Brathwaite, Black Jacobins by CLR James, or How Europe Underdeveloped Africa by Walter Rodney.

As Schumacher explained so clearly, science produces “know-how”, but “know-how” is nothing by itself. It is a means without an end. The essence of education must, therefore, be the transmission of values – values that root us and give us a sense of self and a perspective so that we acquire the wisdom with which to use and direct “know-how” or technology.

Indeed, this is a fundamental point that those who devalue the humanities are completely missing! The fundamental purpose of education cannot be to merely fashion our young citizens into workers who will be able to function and produce in some narrow sphere of economic activity. Rather, education must go way beyond that and must be designed to give our young people a conception of life in all of its complexity and a set of values that will “root” their personalities and imbue them with a strong and healthy sense of identity and a coherent perspective on the world.

Of course, the STEM subjects are fine, and we do need them. But the point is that we need them to be taught within the wider and deeper context of the humanities if we are to produce well-rounded, humane, and civilised human beings who are capable of nuanced, imaginative, and creative thought.

And if one of the fundamental aims of our education system in this rapidly changing economic environment is to produce creative and versatile citizens, rather than citizens whose education has pigeon-holed them to function only in some restricted sphere of activity, then once again, we must avail ourselves of the humanities and their capacity to foster the development of the creative imagination.

The planners of our Caribbean educational systems would do well to ponder on the vision for education that was outlined in the 2008 policy documents of the People’s Empowerment Party (PEP) of Barbados. The PEP proposed for Barbados’ primary and secondary school students an integrated general academic and technical education that should be designed to “dismantle the false distinction between so-called “mental” and “manual” work, and to develop a society of universal, comprehensively educated, culturally advanced and supremely versatile citizens who are not only equipped to carry out a wide variety of social assignments, but are also poised to face any change in economic production, and to compete at the highest international levels”.

None of this – I dare say – can be done without the humanities being accorded a pre-eminent role in our educational system.

But let us conclude by returning to this all-important issue of “values” and the critical role that the humanities are required to play in instilling values in our youth.

Values, as we can all agree, are of supreme importance, but values do not help us to navigate our way through life unless they become our own – a part of our mental make-up. This, therefore, means that they must be more than mere formulae or dogmatic assertions. Rather, we must think and feel with them!

For the educational system to be able to achieve this, it must expose our youth to great works of history, classic novels, penetrating poetry, towering and educating philosophies, timeless ethics, and spiritual wisdom – and it must do so, not only in the international language of English, but also in our people’s own “nation languages”. The whole idea is to get our youth to internalise critical values by intimately experiencing them in the relevant texts.

As far as I am concerned, therefore, there is definitely a place in our educational systems for Shakespeare’s plays, Lamming’s novels, Bach’s classical canon, Derek Walcott’s poetry, and Bob Marley’s world music – works of art that teem with the most vital ideas about the inner development of man and of human society.

And as for so-called “old Greek philosophers”, who so many advocates of a STEM education are so willing to discard, can you imagine how much our Caribbean students would benefit from exposure to such intellectually stimulating works as the English language editions of Plato’s dialogues? This “old Greek philosopher”, whose work was based upon and heavily influenced by the classical African civilisation of Kemet (Egypt), utilised the Socratic Method of penetrating questioning to ventilate such timeless questions as, what is justice, honour, virtue, morality, wisdom, immortality, patriotism, and the best type of state of government?.

No, the critics of the humanities have it all wrong! They are thinking like the narrowest of businessmen and economists, and the direction that they are proposing to take us in is a direction of moral and cultural sterility and of economic narrowness and fragility! Let us ensure that we do not unwittingly fall into the trap!