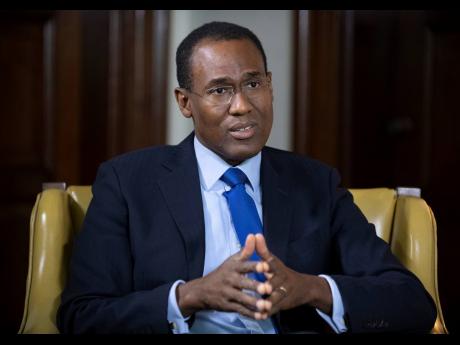 The COVID-19 pandemic is the most serious global public-health threat in a century and is easily the most damaging global economic crisis since the Great Depression of the 1930s. It is wreaking health, social, and economic havoc in every country; Jamaica is no exception.

The challenge is,“How do we cope with this crisis and recover stronger than before?” As the chairman of the COVID-19 Economic Recovery Task Force, appointed by Prime Minister Andrew Holness, it has been my privilege to work with a team of committed Jamaicans to develop a strategy for coping and recovering from the crisis. The idea is not to just recover, but to recover stronger and reset to a new version: Jamaica 2.0. I hope to elaborate on various elements of what this may entail in a multipart series.

Jamaica’s condition, on entry into this crisis, was characterised by a strong economic foundation with deep social capital built together by the Jamaican people. We also have the benefit of lessons learned from our historical experiences with previous crises. Jamaica, therefore, has what it takes to absorb this enormous shock and bounce back stronger.

In the first part of the series, my focus is on why we need to sustain macroeconomic stability and introduce the structural reforms needed for a resilient recovery. While this alone is not sufficient for economic recovery, it is absolutely necessary.

TOGETHER, WE HAVE BUILT BUFFERS

There is no doubt that the impact of COVID-19 pandemic on the Jamaican economy will be severe. Economic activity has dropped precipitously, government revenues have declined sharply, foreign-exchange inflows from tourism have dried up, foreign direct investment will decline, our external balance of payments will be negatively affected, economic output will contract significantly, and employment gains will be eroded.

However, we have built buffers through our collective efforts, which helps to preserve our hard-earned macroeconomic stability amid the crisis:

• Jamaica’s debt pre-COVID-19 was still quite high in relative terms. However, after years of fiscal consolidation, our public debt had fallen by over 50 per cent of GDP, providing more policy room than we would otherwise have had.

• Continuous liability management has allowed for the lengthening of the maturity profile of our external debt. Today, 77 per cent of our foreign debt matures after five years, 46 per cent after 10 years, and 22 per cent after 20 years. A single round of liability-management transactions in September 2019 increased the latter two buckets from 36 per cent and 1 per cent, respectively. Our current maturity profile greatly reduces liquidity and refinancing risks. Some countries, with appreciably less debt than Jamaica’s, face more severe problems due to external refinancing challenges during this period of crisis.

• In addition, the GOJ entered the crisis with an opening cash balance of $87 billion, or 3 per cent of GDP, which came from fiscal overperformance, privatisation of state-owned enterprises, and reintegration of public bodies.

• Monetary reforms introduced two-way movement of the exchange rate and decreased the footprint of the Bank of Jamaica (BOJ) in the foreign exchange market, which increased non-borrowed foreign exchange reserves by US$1 billion between 2016 and 2019.

• Policy reform that made inflation targeting the anchor of monetary policy, in addition to the introduction of a two-way foreign exchange market, allowed for sustained monetary easing prior to the COVID-19 pandemic. The policy interest rate was reduced 10 times since 2018 and was at 0.5 per cent pre-COVID-19. While room for further lowering has been reduced, easier monetary conditions means that firms and households can access credit at more affordable prices.

• In the last two financial years, the BOJ’s balance sheet has been significantly strengthened to pursue open-market operations and relax the reliance on blunt prudential tools for liquidity management. The Bank of Jamaica has been capitalised in the amount of $20.6 billion, and the GOJ has settled central bank losses in the amount of an additional $33.2 billion.

• For 30 years prior to fiscal year 2018-19, the constitutionally provided Contingencies Fund had a maximum of $100 million for emergencies or disasters. In March 2019, the GOJ added to it $2 billion in capital, and in March 2020, an additional $2.4 billion was added, raising the amount in the Contingencies Fund to $4.5 billion. As the pandemic unfolded, the GOJ was able to draw down on the Contingencies Fund to make an immediate and timely counter-cyclical response by advancing $4.2 billion in CARE social and economic support grants well before the passage of the Supplementary Budget.

• In addition, the GOJ quickly accessed US$520 million from the IMF’s Rapid Financing Instrument, which provided a boost to Jamaica’s official foreign reserves.

Based on our historical experiences with crisis, sustaining our macroeconomic stability will be critically important. In the past, structural imbalances and macroeconomic instability have impeded, complicated, and prolonged Jamaica’s economic recoveries.

In both these instances, deep macroeconomic instability before and during the crises compounded the economic challenges and stymied economic recoveries.

To avoid history from repeating itself, we need to push for and provide the environment that can accommodate a swift recovery for which we will need to preserve a sustainable fiscal and debt trajectory, financial-sector stability, adequate foreign-exchange reserves, and low and stable inflation. Economic recovery cannot be attained without macroeconomic stability. There will, therefore, be little room for policy errors.

Broadening opportunity, making Jamaica fairer and more equitable even as we prepare for the opportunities of the Fourth Industrial Revolution will be critical. Promoting universal broadband access, accelerating investment in maths and science education, digitising public and private-sector services, providing a national identification for all Jamaicans, rolling out a universally accessible digital-payment platform, and full transition to an online economy will be transformational. The crisis provides the opportunity to bring in Jamaica 2.0.

Pursuing these reforms concurrently will require ambition, drive, and working together. The GOJ has an important role to play. But the days where the GOJ serves as the engine of growth are long gone. We will continue to need the private sector to lead the way. The GOJ will provide the enabling environment. We need unions, academia, civil society, and other stakeholders to all play their constructive roles. We have shown the world how effective social dialogue can create transformative changes.

The COVID-19 Economic Recovery Task Force was conceived in that tradition and lays out policy proposals for Jamaica 2.0. I will elaborate on some of these in a follow-up article. The full Report is available at https://www.mof.gov.jm/documents/documents-publications/document-centre/...

– Dr Nigel Clarke is minister of finance and the public service, member of Parliament for St Andrew Northwestern, and serves as chairman of the COVID-19 Economic Recovery Task Force. Send feedback to opedjamaica@gmail.com.