‘She Said’ - Telling the untold story 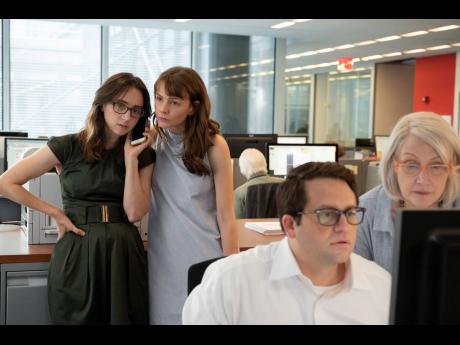 AP
From left: Zoe Kazan as Jodi Kantor, Carey Mulligan as Megan Twohey, Davram Stiefler as Rory Tolan, and Patricia Clarkson as Rebecca Corbett in a scene from ‘She Said’.

Unsurprisingly, movies tend to romanticise movie-making. The magic of make-believe is oftentimes lamented on with a rose-tinted lens. The opening of She Said features a young woman working on a movie set. By her bright eyes, it’s clear she’s realised a dream that quickly turns into a nightmare, as she’s seen crying down the hallway of a hotel.

It’s a strong opener and one that sets the stage for the story She Said has to tell. Hollywood is where fantasy comes to life, but one rife with corruption and unspeakable harassment.

Yet, the journalists at the centre of the film doth dare speak of it. The film chronicles the painstaking work that went into the exposure of one of Hollywood’s most prolific and monstrous producers, Harvey Weinstein. Carey Mulligan’s Megan Twohey and Zoe Kazan’s Jody Kantor are met with new adversity at every turn, whether it’s the reluctance of victims to come forward publicly or the intimidation tactics of the subject of their investigation. She Said demonstrates the sheer difficulty in bringing to light one of the most heinous predators in the entertainment industry. At least one that’s known about.

As the title suggests, the film is concerned with giving voice to the victims of those assaults. Weinstein is featured in the film, but only with the back of his head being shown. The intent of his absence is clear, but one wonders if any actor would dare attempt the portrayal if asked. Instead, the film focuses on the women who worked diligently to complete their story, showing their devotion to the truth, often putting their own lives on hold in pursuit of it.

The film posits them as soldiers in an unbeatable battle, putting the real spotlight on the victims themselves. She Said grants them agency, portraying them as heroes for speaking truth to power. A series of explicitly detailed interviews paint the picture of the producers’ predation, creating a sense of unmitigated dread. As bad as the movie begins, it only becomes more horrifying as it goes on.

Like any good journalism movie, She Said is tense and paced well. It lacks a sense of narrative flow, but such sensationalism would undercut the film’s commitment to truth. The cast of character actors ranging from Andre Braugher to Patricia Clarkson, give the movie all the gravitas it needs, never feeling like a put-on performance. It’s harsh yet, at the same time, optimistic, giving a ray of hope for a safer future for women, despite the systemic and pervasive nature of the issue it presents. She Said is undoubtedly worthy of the attention of the movie-loving audience.

Damian Levy is a film critic and podcaster for Damian Michael Movies.