‘We can produce exceptional films’ 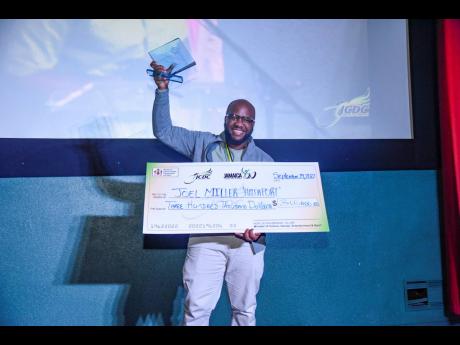 Nicholas Nunes/Photographer
George Malcolm Walker, cinematographer and editor of ‘Hairport’, winner of the 2022 JCDC FIWI Short Film Competition, celebrates his team’s win at the award ceremony held at the Palace Cineplex on Thursday. 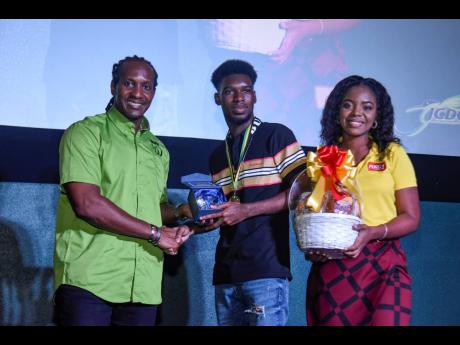 George Malcolm Walker, co-producer of Hairport, the winner of the 2022 Jamaica Cultural Development Commission (JCDC) Fi Wi Short Film Competition, says he believes that Jamaica has all the tools necessary to create and export exceptional films and expertly packaged stories on the world market.

“I really think Jamaica has a very unique potential when it comes to film. We have unique stories, a unique landscape, and just the entire culture [there] is a big deal that’s there for export to the rest of the world in this global economy. I think we really have the talent, we have the cast members, we have the equipment, we have the Ra cameras, we have the lenses and the light that we need. So we really can be creating more and creating quality feature projects that can be exported,” he told The Gleaner.

He was speaking at the awards ceremony for the finalists held on Thursday at Palace Cineplex at the Sovereign Centre in Kingston, where his team walked away with a $300,000 cash prize.

With an entertaining interpretation of the proverb “Nuh mek yuh lef han know wah yuh right han a do”, the short film Hairport was written by Joel Miller, who is currently off the island. The five-minute drama piece tells the story of a desperate hairdresser willing to do anything, even betray her best friend, to improve her financial situation. Hairport also took home the sectional prizes for Best Drama, Best Editing and Best Cinematography, and first place in the adult division.

For Malcolm Walker, who worked primarily on the editing and cinematography, it was challenging but definitely worth it.

“It was a tiring process. It was nothing easy, we had a lot of back and forth, and it really came down to the wire where it was close to the deadline. [We] had to, of course, first get great footage from the shooting, which was really close to the deadline; set up all the lighting; set up all the necessary props in the environment to make everything right and, from there, we just put all the shots together to tell a cohesive story. I am looking forward to creating more films, more short films and possibly a few more features in the future,” he explained of the process.

This was not Malcolm Walker’s first rodeo in film, as he revealed to The Gleaner that he spent many hours shooting smaller, low-budget films on his phone before owning his first professional camera in 2017 when he was far more involved in creating films. He also dabbles in photography and is the managing director of EdgeLights Media Ltd and Records. This is also his third film with Miller.

Other winners included Home Bound by Nasika Alliman, which took second place, as well as the awards for Best Sound Effects, and Jamaica 60th Film and Trade Secrets by Jhanielle Powell, which copped third place overall and in the youth category, as well as Best Comedy.

Keron Watson, who took home the first-place prize in the youth section, was the only animated entry with the film Friend Killa. Proud of his work, he shared that he is a self-taught animator who hopes to one day work with Disney.

“I started (animating) in 2020 when COVID hit. I mean, I still had school, but I had to stay at home. One time, I was on YouTube just watching animations over and over, but I said I want to start it (doing animations). So I watched tutorials of it till I ended up on a software. Back in September, I started my YouTube channel and I just kept going till now I am here. Hard work pays off, is all I can say,” he shared excitedly.

A total of 15 completed entries were reviewed by the judges, including The King’s Way by Shaneque Johnson; Nuh Mek Yuh Right Han Know by Donnielle Robe; Same Knife by Jhaneil Smith; Friendemic by Romardo Lyons and Nora Gaye Banton; Batty and Chamber by Amoy Smith; Because I Love You by Tiffany Crosdale and Joell Smith; Fatal Devotion by Amanda Lawson; Womb by Diandra Harrison; Let It All Out by Rysha Brown and More Like Yu by Emanuelle Senior.

Alando Terrelonge, state minister in the Ministry of Culture, Gender, Entertainment and Sport, spoke at the ceremony and used the opportunity to commend the film-makers and underscore Brand Jamaica’s strength.

“It was really important for us as the JCDC to actually show persons the very length and breadth of the talent of persons that exist in Jamaica. What today has demonstrated is the power of language, the power of culture and that Jamaica is grand marketing. If you slap Jamaica pon it, it aguh sell. That is the power of our culture on the global stage,” he declared.