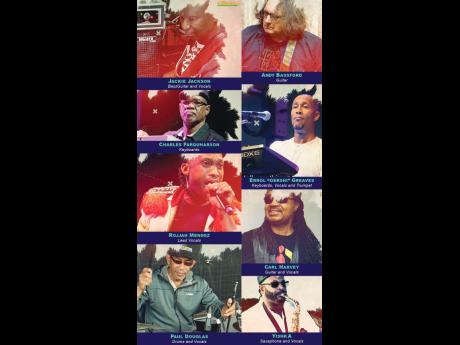 When the members of the legendary Toots and the Maytals band announced last December that they would be changing their name to oBessa, they vowed to pull out all the stops by “bringing the best of Toots and the Maytals experience and unveiling talent in the band that has been hitherfore hidden”.

Fast-forward to September 2022, and oBessa is ready. In fact, oBessa is Solid. That is the title of their 15-track debut album, which is scheduled to be released next year, and from which they have already dropped the first single.

“We are as solid as a rock,” Jackie Jackson, veteran bass player who is always “too wonderful for words”, shared. “Everybody is excited. We are currently shopping for a deal [for the album], and the interest is high. For this first jump-off, we are doing seven covers of mega-hit songs that we had recorded, along with some originals.”

Numbered among those classics is Freedom Street. First recorded in 1970 by Ken Boothe for producer Leslie Kong, many of the original session musicians were members of Toots and the Maytals.

“When we made Ken listen to it, he laughed and said, ‘Mi sorry a nuh me sing it over.’ And, of course, Ken gave us his blessings. He is happy for us,” Jackson said, adding that the idea to re-record the song came during the Black Lives Matter upheavals.

oBessa notes, “The song is as relevant now as it was then, even more so. This song breaks down the barriers of class, sex and race to embrace a oneness from which humanity’s ultimate freedom will emerge.”

Another hit that oBessa decided to re-record and put their own stamp on is the evergreen Girl I’ve Got a Date, and Jackson also proudly shared that his late wife, Karen Smith, also has a song on Solid. It is titled Mother and Child Reunion and is one of the three singles scheduled for release. The other is the title track, Solid.

Responding to a direct question if there are any Toots and the Maytals songs covered on the album, Jackson said, “No. No Maytals songs on this first venture. We try to keep clear of that one.”

A legal tussle between the estate of the late Frederick ‘Toots’ Hibbert and the Maytals band last year eventually led to the band acknowledging that Toots’ estate had retained full ownership of the Maytals name and trademark. In a joint statement in December 2021, the band said that they were “not trying to litigate who the Maytals are or are not” and that “Toots himself was never confused as to who he considered the Maytals to be...they were the musicians that gave him the safety net and the confidence to step on a stage in front of a stadium-sized audience without as much as a rehearsal”.

Jackson reiterated, “As we said then, we and our fans will be better served by moving on and putting our energies into creative endeavours.”

Not wanting to regurgitate the past, he immediately segued into more about Solid. He shared that one of the most challenging aspects was choosing 15 songs which would make the final cut from the 40 that the group had recorded.

“We brought it down to 20, and then after that, we kept taking out and putting in. But we finally signed off on 15 that we are all happy with.”

The members of oBessa are Paul Douglas, Jackie Jackson, Carl Harvey, Charles Farquharson, Rojjah Mendez, Andy Bassford, Yishka Greaves and Gershi Greaves. A release stated that guitarist Radcliffe ‘Doogie’ Bryan’s contribution to oBessa’s and to Toots and the Maytals’ sound, must be duly noted. “Doogie has taken some time off the road for personal reasons, and his particular feel and groove will be greatly missed. Established New York based guitarist Andy Bassford, who has performed with the group for many years, will take over Doogie’s guitar duties while adding his own flavour to the groove.”

“Andy is a great person and a great guitarist who knows and loves reggae music,” Jackson said enthusiastically. “He used to play with Lloyd Parkes, and any time we were on the road, and one of our guitarists was out, we would always draw for Andy. So when we called and told him about Doogie, he said, ‘My suitcase is at the door.’”

Explaining that oBessa is a shortened form of the word ‘Oracabessa’, Jackson declared that “2023 is the year of oBessa”.