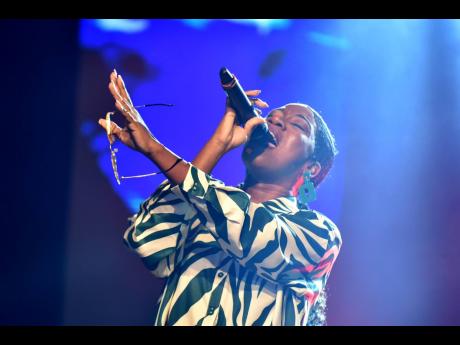 Former ‘Digicel Rising Stars’ contestant Rosh Reign, who recently changed her name from Rosh Rebel, has places to be. The Montego Bay native wants to create a royal musical empire.

Last week, the singer and songwriter returned to the ‘Rising Stars’ stage, where she successfully delivered her single, titled Firm. In an interview following the performance, Rosh Reign described the moment as “nostalgic”.

“It was exciting being on that stage in a different capacity – this time not as a competitor, but as a recording artiste who has grown vocally not just as a performer, but being comfortable on a stage,” she told The Gleaner.

Rosh Reign was part of the all-female trio, SLR, which made it into the top three of the competition in 2008, the year that Cameal Davis won the title.

“The last time I stood in front of Anthony [Miller], his comments weren’t so cool or the most pleasing,” she shared.

As one of the resident judges since ‘Digicel Risings Stars’ first aired on TVJ in 2004, Anthony ‘Killer’ Miller has earned the reputation of being the most difficult to please. Sometimes he is referred to as “the judge who everyone loves to hate”, as host Terri-Karelle Reid said in her introduction. Miller’s critique on the contestants’ performance and vocal styles can be harsh, but for the rare few who receive a good review, it is usually laced with witty comparisons.

“I want to say that Anthony means no harm,” Rosh Reign quipped, as soon as she was questioned about her overall experience as a contestant, adding that, “it is to help the performer at the end of the day”.

The Tomorrow singer’s advice to the Season 18 finalists is, stay focused despite all the chatter from the critics. She said that while it may not appear possible at one specific moment, it may come to fruition at a later time or transform into something greater.

Rosh Reign currently works in the tourism and hospitality sector as a cabaret performer on the hotel scene in Montego Bay. She has been working on her debut EP since embarking on her professional recording journey, but explained that “school was also in the mix”.

“I was doing business studies, but I remained focus. The aim is to focus on your end goal. Being a cabaret performer has also contributed to my growth, because the more you sing, the more you can recognise your vocal abilities and improve on those areas that aren’t as strong,” she said.

She recently made a major career move by signing a management deal with Texas-based record label City Rock Entertainment, and is expected to start exploring new markets in the near future. Her first release since inking the new deal is a collaboration with dancehall lyricist Devin Di Dakta titled Easy. It was produced by ZH King.

“Persons will see me on the Kingston circuit, as I come to town often. And there’s a lot more work being put into promoting my debut EP, which has been a long time coming. The team just wants to make sure we get the right people in our corner to get the ball rolling. I don’t want to reveal too much just yet, but I’m firm in my beliefs that big things are coming my way, and from me to the world audience,” Rosh Reign said.