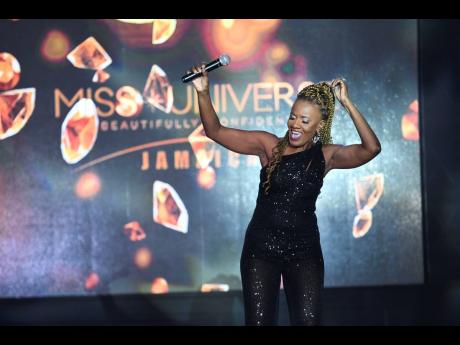 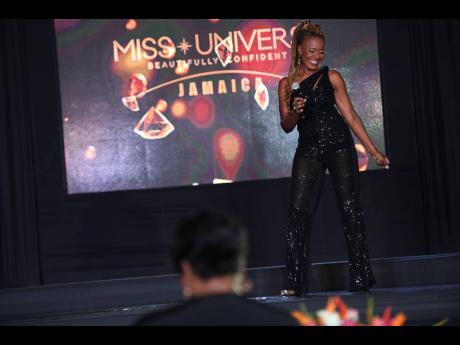 She may not be recording new music today, but veteran songbird Gem Myers is ambitious in her goals to have her existing catalogue of music and the covers of other songs which she includes in her sets send a message. One of the issues that has been weighing on her mind is the number of women and children who have shown up on Jamaica’s ‘Missing Persons’ list and who have lost their lives violently over the past decade.

“My thoughts forever rest on visually impaired Jasmine Deen, and how her father said he could not eat and the Clarendon family – the mother and her four children,” Myers shared following her headlining performance at last Saturday’s staging of the Miss Universe Jamaica Beauty, Fashion and Wellness pageant.

Further airing her frustrations on the news report about a Mandeville man who threatened (in a video posted on social media) to kidnap women and children in the parish when school reopened, the singer told The Gleaner, “those sorts of things should not even be spoken out of anyone’s mouth, even as a sick joke … lock him up.”

Of course, a passionate Myers would not have hesitated to accept the challenge to take a position musically when the national pageant organisers tapped her to be part of a message-filled tribute to the women and children and their families.

Myers shared, “The tracks selected for me to perform were: Stevie Wonder’s Love is in Need of Love Today and Whitney Houston’s I’m Every Woman. The original plan was to have the contestants hold placards with the names of the women and children as I performed the first song; I don’t know what happened but that did not go as planned.”

She added, “The requests were specific and I believed it relevant. As I stated, I always wondered what happened to that girl and how she just disappeared without a trace. I’d hope for persons to open their eyes and ears because the strategy we see now, is until something happens, no one acts and that is ridiculous in this climate.”

The lights were dimmed in the middle of the Gimme Good Loving singer’s performance, but not in a way to strike that impact she wanted, however, Myers continued to sing her heart out.

“It was in remembrance of those who passed on and those we can’t find and that’s what mattered though adjusting the lighting and having the audience turn on their mobile phones would have had a greater effect,” she said. “All the same, I’ve always been one to perform as if it is the first time on a stage, meaning with the same passion and I hope persons witnessed this.”

The audience joined during both of Myers’ segments, but truly enjoyed her rendition of the Stevie Wonder classic, which he has said was written in late 1974 in the room of a New York hotel when Yolanda Simmons was pregnant with their daughter. The message of the song is that for love to be effective, it has to be fed and the R&B-soul icon must have known it would have been a generation-defining record with a lasting impact.

Speaking of longevity, Myers noted that she is used to persons requesting her to sing the Dreamgirls favourite And I’m Telling You, “as the lyrics, while it’s not an original, is a powerful song to sing and perform”.

“I love the dynamics of the song – it stretches me and is a challenge on its own. Part of the reason I stepped away from recording for a while is because records aren’t selling like we want them to, but it’s always good when I deliver the older records, those and those of my own, to bounce back to feel-good music for a performance and just do my best doing so. It also feels great being able to grace a stage again, the musical fraternity would agree with me that we feel glad to be working and sharing,” Myers said.