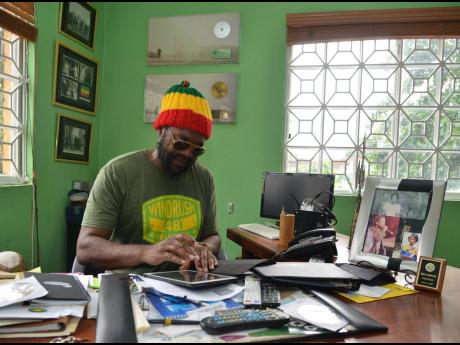 Kenyon Hemans
Tony Rebel says he is feeling excited about the 28th staging of Rebel Salute, adding that expectations are high.

Roots reggae, art, ital cuisine and cannabis festival Rebel Salute is set to return with a physical staging in 2023 for the first time since Jamaica recorded its first case of COVID-19 two and a half years ago, the organisers announced on Sunday.

Speaking to The Gleaner about the preparations for the two-day festival and improvements made to the concept for its return, reggae artiste Patrick ‘Tony Rebel’ Barrett, the event’s founder and promoter, said that the next step was to “get the logistics going, along with the line-up”.

Over the years, there have been calls by artistes and patrons alike to have the event turned into a three-day affair, but Rebel Salute will once again be held for two days. It is slated for Friday, January 20, and Saturday, January 21, at the Grizzly’s Plantation Cove in St Ann. Local entertainers like Bushman have stated that lengthening the event would solve the issue of artistes not having enough time on stage, but according to Tony Rebel, it is more about the management of time.

“We are working on those logistics now. Time management is in the hands of stage management. Once time is allotted to the artiste, we will take it from there. This 28th staging, I am feeling excited, and my expectation is high, so we just have to put in the work. I am feeling excited and enthusiastic about 2023,” he said. “Our priority is first, safety for the people, and then we allow them to have a good time. In 2021 when we did a virtual show, the climate [during the pandemic] was not conducive for the physical show to take place, and so I applaud my decision to not have the event last year. The fact that for two years it has not happened physically, I believe that the absence will make the presence better.”

While Tony Rebel has not revealed the names of any artistes on the roster, he asserted that some have already been confirmed to perform. During its 28 years, Rebel Salute has adopted the concept of billed performers using their birth names to show that there is more than one side to the talent, the show organiser said.

He emphasised, “We want to show that some artistes have two sides. They may talk gunman lyrics, but they can also be cultural; [so] when I want their cultural side, I use their birth names. It also gives people the opportunity to know their real names. For the process of booking these entertainers who act as cultural ambassadors through their work, I zoom into their catalogue of music and see what they can bring to the inspirational and motivational process.”

Rebel Salute has featured a number of dancehall and reggae artistes, including Moses Davis and Rodney Price, known more popularly by their monikers Beenie Man and Bounty Killer, as well as Queen Ifrica, Barrington Levy, Capleton, Agent Sasco, and Glacia Robinson, among others. The takeaway is that the show has also been the catapult for many artistes, and Tony Rebel promises it to be a platform for entertainers, young and old, continuing to give wholesome performances to its audience.

“We always use upcoming artistes on our show. There are a lot of big names that got their big break on Rebel Salute, and our platform remains one that features lots of new, along with the veteran acts,” Tony Rebel offered.

Earning the reputation of being a festival of edutainment, it has advocated for the preservation of reggae and the legalisation of marijuana since its inception in 1994, when it started as a birthday celebration for Tony Rebel.

The forum, hosted by the event each year has been focused on the full legalisation of the medicinal herb, and this also continues in 2023. In 2015, cannabis tourism received a boost, as Rebel Salute became the second music festival to be granted exemption status to advertise as a marijuana festival under the amendment to the Dangerous Drugs Act. Cannabis Cup in Negril was the first to receive an exemption. From there, Tony Rebel and his team of organisers inaugurated the Herb Curb to accommodate medicinal, sacramental and recreational uses for marijuana, and to act as a space for seminars to educate on how it should be used.

“Each year, we advocate for the full legalisation of marijuana, and personally, I would like to see less bureaucracy in getting a marijuana licence. Our Herb Curb will be happening with a big difference this time, and we will announce more as we make the necessary preparations for its return in 2023,” Tony Rebel said.

He added that he wanted to enforce the message: “You can survive, but first you have to be alive, so protect your life.”