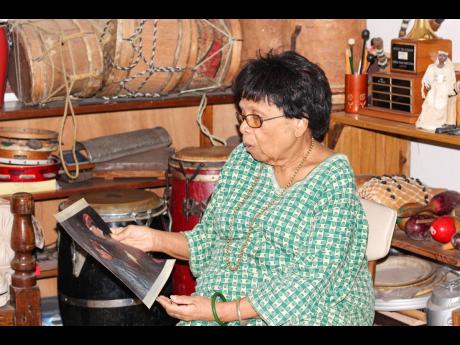 Stephanie Lyew
Marjorie Whylie in a reflective mood as she looks at a picture with the Prince of Wales. 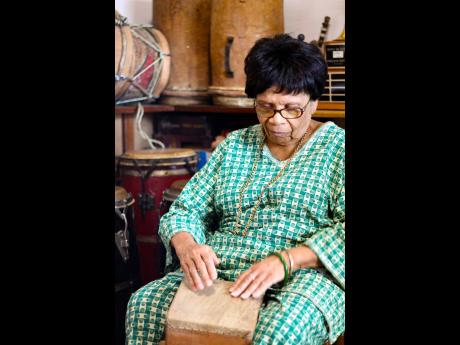 Stephanie Lyew
Whylie, now 77, was introduced to the drums at six years old. 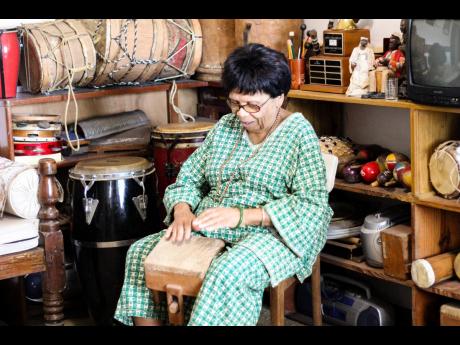 Stephanie Lyew
The music room at Whylie’s home is a gallery with over 40 percussion instruments.
1
2
3

Whenever the stories of drumming are chronicled in Jamaica’s musical landscape, the name Marjorie Whylie is likely to come up. Not only has she committed to playing the pulsating instrument – among other instruments, including the piano – from her introduction as a six-year-old while participating in extra-curricular activities and earning her the attention of some of Jamaica’s noted musicians, she continues to share her knowledge with anyone who wishes to listen and learn.

Whylie, 77, has been drumming to her beat for more than six decades and it has been a rewarding and rhythmical road, she said. As you enter the music room at her home, a gallery of over 40 percussion instruments meets the eyes, and her piano is pristine. This alone tells a story of where she has been and the people whom she has seen.

She began lessons with noted Kingston music teacher Ena Helps, who also encouraged her to play in a percussion band, starting out on the bells, tambourine and then eventually, on the drums which she played with sticks. However, it was short-lived, as Helps wanted her to exercise her skills as conductor.

“Miss Helps gave me a conductor’s baton and, as a child, you want to be in the mix of things, so that lasted for about two years. At nine years old, I played at the Housecraft Training Centre, operated by Aimee Bailey, in my first concert ever and that’s where I met the Honourable Louise ‘Miss Lou’ Bennett,” Whylie told The Sunday Gleaner.

“I remember the lady who was to accompany her on piano did not show and I said, ‘I can play for you Miss Lou’, and I went to the piano and did a little pow pow behind her. Of course, she was saying this is not possible, but when I was done, she say, ‘But chile, yuh can play’, and it gave me such a good feeling. You know, because we used to hear her on the radio as little children when she did a programme called, Calling the Caribbean for the BBC. It was an honour,” she continued.

Her musical talents continued to flower, as she was allowed to participate in many concerts and perform with groups led by some of Jamaica’s best-known musical figures including Sonny Bradshaw and Ernie Ranglin, among others.

She said, “Even though I was the youngest of three children, my mother was not too concerned about my being involved in different activities such as a jazz workshop for youngsters that Sonny Bradshaw had started within walking distance of where I lived on Ballater Avenue. I would be around 14 by then, and I’d walk there for practice and rehearsals and I developed pretty quickly with that type of exposure, though I was already playing for 10 years.”

Back then, the idea of variety concerts was a big thing. These featured several persons within the arts showing their talents from reciting poetry, to singing and dancing and some would read excerpts from a play and it was normal for established professionals to perform and pull in youngsters to give them a platform to do the same she said.

The percussionist, pianist and educator has been at the forefront of cultural research and development through her work with the Folk Music Research Department at the School of Music at the Edna Manley College of the Visual and Performing Arts; in her role as musical director of the National Dance Theatre Company for 45 years; and through her travels where she has even performed for royalty. She speaks casually about her various interactions with the Prince of Wales, Prince Charles, as though it were an everyday encounter, and her face lights up.

Whylie is to be presented with a lifetime achievement award during the 12th annual staging of the Jamaica Poetry Festival today at the AC Hotel.

“I was absolutely surprised when the organisers sent me an email to say there was going to be this presentation. I mean, I can think of two occasions where I participated in a whole day of performances and interaction on some of the poetry society’s events but I am a poet by no means [so] I was just amazed they would come up with something like a lifetime achievement award for an old girl like me on her way to 78 in October,” Whylie shared.

She said that in Jamaica developing patterns to go along with words is natural, as much of the Caribbean’s art requires rhythmic accompaniment. She educated persons in African, American, Latin-American and traditional Jamaican music and percussions but Whylie will say, “I was a student before I was a teacher, but I am still learning”.

“I got so immersed into playing over the years and I absorbed so much as I continued my collecting and research and that sort of thing. I am honoured by my experiences and will continue drumming and teaching piano to the students that come to me,” Whylie said.