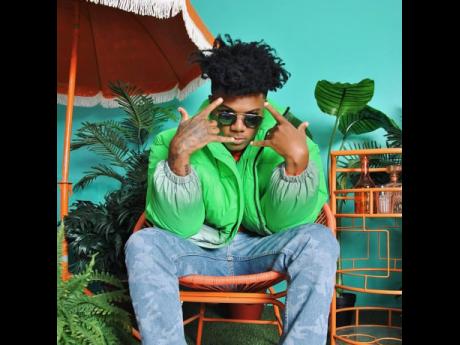 Contributed
Beach Boii has been establishing connections with local reggae and dancehall acts such as Vybz Kartel, Ding Dong, and Charly Black.

South Florida-based recording artiste Beach Boii is often thought of as a rapper. From his style to having inked skin, the entertainer’s image is what most use to define him, but there’s one signature tattoo that explains what he is trying to achieve.

“I have the WWE (World Wrestling Entertainment) logo tattooed on my left hand because it has so much meaning,” he told The Gleaner.

The WWE logo has evolved several times from 1952 to 2014, with its latest design dubbed the Network Era logo. It has always been a representation of warriors in the ring. The red mark specifically is symbolic of struggles, emotions, and agony, but along with those meanings, Beach Boii explained, “the ‘W’ is me aiming to win in music. It is for [the] world”.

He added: “I was, like, I want to do something different and stand out — that’s how I got the tattoos, others like my mother’s name, father’s signature, different words and symbols and of the phrase ‘only God can judge me’. The word ‘alone’ because sometimes I feel that way, but with music, I feel like I’m not, and I have had people reach [out] and tell me that my music does the same for them.”

Born Christian Andre Beach, the 25-year-old, originally from New York, said that the music he has been hearing in the US in recent times has a generic sound.

“Everyone’s either boxed in or sticking to one genre. To them, it is not about being a rap, hip-hop, or R&B artiste. They just prefer to avoid blending the genres. Americans, some, not all, can be very close-minded when it comes to music and how they view the world; some even think America is the world, but that’s not the case,” he said. “People that listen to me now aren’t really exposed to what the whole world has to offer. I am trying to change the sound of music where I’m from or currently am in Florida, and [I] want to show people a different side of the world through my music.”

The type of music Beach Boii says he is making is world music. Songs like his 2017 hit single Rude, Shine, This Time, featuring Sony Music Portugal’s star Richie Campbell, Real Gyalis, and Don’t Run, all have elements of pop and dancehall intertwined with the sounds of afrobeats as well as the up-tempo reggaeton and bachata styles of Latin America.

Over the past year, Beach Boii has been establishing connections with local reggae and dancehall acts such as Vybz Kartel, Ding Dong, and Charly Black, and producers that he knows will not only expand his reach, but share an understanding of the overall goal.

“I felt like if I am going to attack the world with a different sound, I had to start where my roots are. My mom is from Jamaica while my father is from St Vincent and The Grenadines (SVG). I also like the feeling of coming here because even while working, I feel I am vacationing and walking in my family’s shoes. I have an island upbringing though I was born and raised in the US. I was brought up on R&B and hip hop, like gangsta sounds of 50 Cent, but on a lot of dancehall, reggae, calypso music, too. These genres all influenced me because everything I listen to, I try to make it and make it something of my own,” Beach Boii said.

The artiste has been to Jamaica twice over the past year. He expressed disappointment about not being able to return to SVG in 2021, having not been in five years. His plans were stalled due to the continuous eruptions of the La Soufrière volcano, which started in April.

The NYPRODS-signed artiste says the work has been paying off. His latest collaboration with Ding Dong titled Up Down was produced by Netherlands-based producer Reuben Isaac and his label.

“I had this song from before, but I am rebranding it. I don’t even want it to be called a remix. From its initial release, the label and one of my friends told me to try to get Ding Dong on the track, and now it has happened, and we’re putting in all we can to promote it,” he said.

“This one’s different from the track with Vybz Kartel in the sense that 2 Cold is not dancehall when it comes on to the sound or rhythm, but he makes it what it is. I’d love to do more work with these artistes and other OGs of the genre, but I also like new artistes like Skillibeng. For people in the States who don’t listen to dancehall music, he is out of this world. People can definitely look out for more. I also have a song with Charly Black to be released soon. At first, I didn’t like the song, but now that he is on it, I love it,” Beach Boii continued.