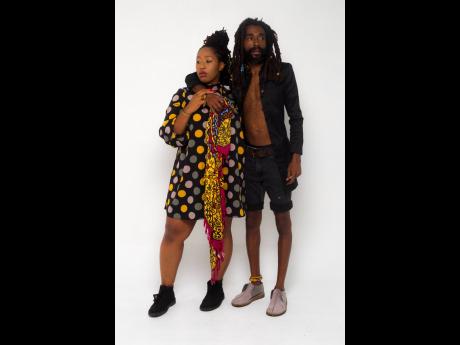 Kushites. It’s the name of a Nubian kingdom often credited for the region’s rich culture and awe-inspiring architecture, but also a fetching label for a marijuana enthusiast. For Chiney KiKi and Evie Pukupoo, it’s both. Even greater? It’s the name of their EP, which they’re describing as therapy music.

“It’s therapy for whoever or whatever people are going through, whether it’s financial, depression, or the whole pandemic,” Chiney KiKi told The Gleaner. “We did the EP in the pandemic, where we couldn’t stay in the studio till 3 a.m. Andrew seh come off the road by 8 o’clock, so we knew we had this much time to do songs. My music is always going to be music that people can relate to, so we are really showing people that, hey, we’re going through the same thing you’re going through, and so far the feedback has been great.”

Four tracks comprise this remedial work which debuted two weeks ago, arranged with the purpose of “making people feel like they’re at a live show”. The title track, produced by Blazin Fyah, serves as a reggae ode to the resilience and magic of Africans. Tulapro produced the Afrobeats love song Far Away, while Vladimir Krkljush produced the R’n’B-rock track Do You and the “electric reggae” song Frenemy. The latter is Chiney KiKi’s favourite.

“It kinda covers all aspects; not just a friend who’s an enemy, but also the government against the people, spiritual fight … . Frenemy is a big deal to me because it’s very difficult being a woman in the industry, and a lot of people don’t know what I had to go through in music to get to where I am; and I’m nowhere yet, so it’s very important to me.”

With this said, the songs drew inspiration from everyday life, like the murder of 20-year-old Khanice Jackson, which inspired Do You.

For Evie Pukupoo, working on Far Away stands out the most as it marked his first Afrobeats song.

“I was trying to be as authentic as possible as the Afrobeats artistes are, and that was fun for me,” he told The Gleaner. “I feel like people are not lyrically honest with love songs, because sometimes we want to catch bullets and trains in our brains for our love … . I tried to not do too much romanticising with the lyrics and it still sounds lovey- dovey.”

His presence on the project is further intriguing as he’s usually musically associated with The No-Maddz. Evie Pukupoo shared that his long-time friendship with Chiney KiKi allowed for an organic collaboration, paired with his desire to expand his creative horizon.

“I was in a transition stage where I was more open,” he said. “Sometimes you’re not supposed to be an overprotective parent in your creative process, so I was being more flexible and I found it all interesting.”

The project also allowed him to engage his acting abilities through the accompanying short film directed by Robin Chin. The production is in the editing stage and will see the integration of the tracks to tell the story of a couple (Evie Pukupoo and Chiney KiKi) navigating the highs and lows of the man pursuing his dreams. It is expected to premiere on Chiney KiKi’s YouTube page by early November. Other visuals and pre-recorded performances for the EP will also be uploaded to her platform over time.