College to benefit from global partnership 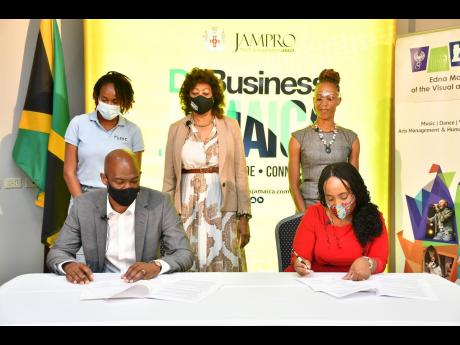 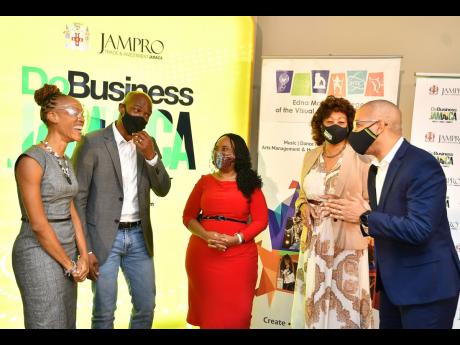 Contributed
From left: Kerry-Ann Henry, vice-principal, administration and resource development at Edna Manley College of the Visual and Performing Arts (EMCVPA); Maurice Hamilton, founder and CEO of The SMC Group; Dr Trudy-Ann Barrett, acting principal, EMCVPA; Diane Edwards, president, JAMPRO and Gabriel Heron, VP of marketing at JAMPRO; share a laugh after EMCVPA and The SMC Group signed an agreement to partner to enhance the music and audio production, animation, as well as, dance specialisations at the college.
1
2

President of the Jamaica Promotions Corporation (JAMPRO), Diane Edwards, could not hide her glee at Wednesday’s official signing of an agreement between the Edna Manley College of the Visual and Performing Arts (EMCVPA) and the SMC Group, a global marketing agency, which lists as its speciality – assisting brands in developing activation strategies centred around music and talent-based assets.

Headquartered in London, the company, which operates in 17 markets across the globe, and whose projects have also involved celebs like Jamaican Olympian Usain Bolt, Korean pop band BTS, Colombian superstar Maluma and Americans Kevin Hart, Jason Derulo and Kanye West, is taking steps to make an investment designed to enhance the music and audio production, animation and dance specialisations at the Edna Manley College.

“We are forging an exciting partnership,” a delighted Edwards told the virtual audience. “At JAMPRO, we believe that partnership is essential to building local industries and to creating valuable opportunities for Jamaica’s people, so we are pleased to see this agreement between SMC and Edna Manley College,” she added, while highlighting Jamaica as a creative mecca and making the point that the CEO of SMC, Maurice Hamilton, is “a son of the soil”.

Originally formed to provide specialist PR and marketing services support for record labels and film studios (Universal Music, Sony, BMG, EMI and Twentieth Century Fox), the SMC Group is positioned as one of the leading entertainment brand strategists, defining global policy for Fortune 500 companies such as Unilever and The Coca-Cola Company, the company’s bio states.

With a mission to drive the island’s economic development through growth in investment and export, JAMPRO has been central to discussions with SMO Group that will see Jamaican creatives being well represented on the global stage. Edwards noted that Hamilton’s thrust is Caribbean-wide; however, initially, the focus will be on Jamaica, and will enhance music and audio production, animation, and dance specialisations at the EMCVPA.

The partnership will begin with an investment into the development of a music production studio targeting students to develop local songwriters, producers, and artistes for production for international markets. Edwards explained that SMC would build out and equip, at the cost of US$30,000, a music studio that will provide the students with the physical infrastructure to develop local songwriters, producers, and artistes. There is currently no such studio at the school. “SMC will also offer [an] apprenticeship to five Edna Manley graduates each year [and] intends to recruit EMCVPA students for job placements,” Edwards disclosed.

Hamilton, who expanded on SMC’s “global strategy to have Jamaica and the Caribbean recognised as an international resource for innovative content in the fields of creative and performing arts”, said it was a joy to see how receptive JAMPRO and the Edna Manley College had been.

“This is the first step of an exciting initiative to establish Jamaica and then the wider Caribbean region as a creative hub that will develop creative and business professionals as well as content. And for SMC, it creates a solid, efficient pipeline of creative talent to service our global clients,” Hamilton said of the collaboration, which aims to develop regional talent and intellectual property for export to international markets.

“We want to ensure that our commitment to Jamaican talent is substantive. Through greater education, funding, and through our network within the global marketplace, we can provide a platform from which Jamaican talent can flourish internationally,” he said.

Hamilton told the virtual audience that the timeline for completing the studio at the EMCVPA is August to September, in time for the new school year.

Edwards, in pledging JAMPRO’s commitment, stated, “Knowledge exchange, market outreach, and the strengthening of our creative talent are just some of the positive outcomes that will come from this collaboration. From our perspective, the opportunities are endless. We will therefore be sure to support the SMC and EMCVPA partnership, and look forward to the exciting days ahead as they execute this project, and we continue the journey to make Jamaica a major creative hub.”

JAMPRO is an agency of the Ministry of Industry, Investment, and Commerce.

Acting principal of the EMCVPA, Trudy-Ann Barrett, in a brief address, emphasised that “the arts are serious business”, and noted the significance of the partnership being signed in 2021, declared by the United Nations as the International Year of the Creative Economy for Sustainable Development.

The SMC Group assists clients in developing their brand strategies, creative ideas and entertainment-based partnerships. The company has worked on campaigns for brands like The Coca-Cola Company, Net-A-Porter, Unilever, Diageo, Cartier, and many other globally recognisable names.