Smikle relieved as Daddy U-Roy to be buried May 19

Viewings at Perry’s next week 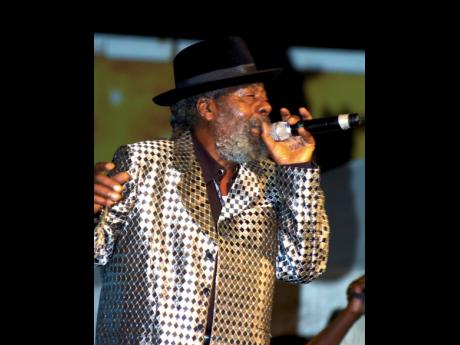 Winston Sill
Ewart ‘U-Roy’ Beckford will be laid to rest on Wednesday, May 19.

Some three months after his passing, pioneering toaster Ewart ‘U-Roy’ Beckford will finally be laid to rest.

Daddy U-Roy, the Godfather of Toasting, passed away on February 17. His burial will take place on Wednesday, May 19, at 1 p.m. at the Dovecot Memorial Park and Crematorium in St Catherine.

“I get a sense of relief that we have set a date at last. We have been trying to accommodate everybody, but it’s best that we just put him to rest. We never want to just put him down like that without giving his fans and well-wishers a chance to say goodbye, but people understand that the virus caused restrictions and we have to obey the rules,” Marcia Smikle, Daddy U-Roy’s partner of more than four decades, explained.

Smikle disclosed, however, that there will be a viewing of Daddy U-Roy’s body at Perry’s Funeral Home in Spanish Town, St Catherine, which is handling all the arrangements.

“We had to get permission for the viewing, and Minister Grange’s office (Ministry of Culture, Gender, Entertainment and Sport) has been in touch with me to say that everything is good to go. Mr Perry has all the details,” a grateful Smikle told The Gleaner.

When contacted, the CEO of Perry’s Funeral Home, Peter Perry, emphasised that all COVID-19 protocols will be strictly observed during the viewing. “All day Monday and Tuesday and for part of Wednesday, fans and well-wishers can come here and view the body of Mr Beckford. Masks are required, and social distancing will be in place. The burial is at 1 p.m. on Wednesday, so the viewing will close off shortly before that so that we can head straight to Dovecot since traditional services are still on hold,” Perry told The Gleaner.

The burial will also not be streamed live. As one of the measures put in place by the Government to inhibit the spread of the coronavirus, burials are permitted to take place on weekdays only, with a cap on attendees at 10 persons.

SOMETHING BIG NEXT YEAR

In an interview with The Gleaner at the end of February, Smikle had disclosed that initially, the discussions had centred around plans to host two viewings, one at the National Arena in Kingston and the other at Perry’s Funeral Home, with the live-streamed funeral set for Sunday, March 28. Now that everything has been scaled back considerably, Smikle hopes to have “something big” next year on the first anniversary of the legendary toaster’s passing.

“I want to thank everybody for their patience. When we put him to rest, we can get some closure. Right now, to be honest, sometimes it don’t even feel as if he is dead. Because he used to be away on concerts and tours, it just feel like he is overseas and soon come back. We want to do something on the one-year anniversary, so all his friends can come together and remember him and give their tributes,” Smikle shared.

Daddy U-Roy passed away in February at the University Hospital of the West Indies after undergoing surgery there. Born on September 20, 1941, the trailblazer, who gave every toaster, rapper and MC their career, was 79. He is survived by 16 children.

One of dancehall’s most influential figures, Daddy U-Roy helped transform Jamaican music through his ‘toasting’ style. He started his career in the 1960s on sound systems and hit the charts in the early 1970s as a toaster on popular hit songs like Wear You to The Ball (alongside John Holt) and Tom Drunk (with Hopeton Lewis).

In paying tribute to U-Roy, Trojan Records label, with which he was affiliated, noted that he paved the way and influenced genres worldwide with his original ‘toasting’ sound, a sound that has evolved into modern-day rap. “We have so much to thank U-Roy for. His musical style will live on forever,” the statement posted to Instagram read, noting U-Roy’s chart success.

The veteran toaster helped transform Jamaican music through an innovative vocal improvisation process known as ‘toasting’, where he expanded the role of a DJ into someone who didn’t just play and introduce records but added their own verve and vocal ability to the product.