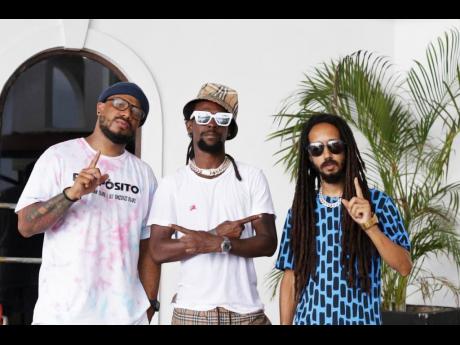 Contributed
Panamanian entertainer Karims (left) and producer DJ Chiqui Dubs (right), recently visited the island, and on their to-do list was the completion of a project with Jah Cure. 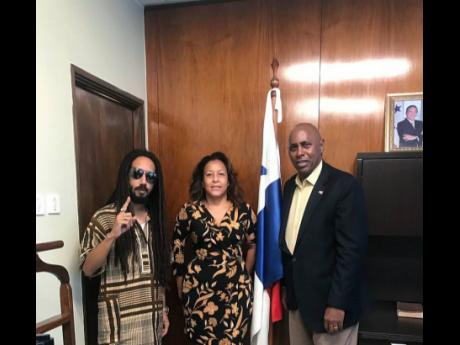 Panamanian reggae artiste Karims, who recently released a single and music video with singer Jah Cure, is feeling particularly filled with purpose. Wanting to “get it right,” he travelled to Jamaica to shoot the visuals for Propósito, produced by Panama’s DJ Chiqui Dubs.

“We shot the video in Kingston, and it was amazing. We are living the dream right here in Jamaica,” he told The Gleaner. “’ Propósito’ means ‘purpose’, and it is a really nice song. Jah Cure sings a few words in Spanish, and it is the first time he is doing this, so that is [a] good look,” he said excitedly.

Propósito, a groovy, smooth-like-silk single, was released on April 30 and is distributed through VPAL Music. Done mainly in Spanish, it cements reggae in the Latin market, while engaging fans of Jah Cure who would not necessarily tune in to “reggaespañol”.

According to Karims, “Reggae is very big in Panama. I grew up listening to lovers’ rock from singers such as Gregory Isaacs and Beres. We love Beres Hammond, and Jah Cure is one of the artistes who the women in Panama adore.”

Karims has forged alliances with recording artistes, producers and promoters in Colombia and Puerto Rico, and he has endorsed moves made by producer Chiqui Dubs, which transcend making music in a studio. Chiqui Dubs, who also travelled to Jamaica, has a rather big vision which he is meticulously translating into reality. It involves a cultural exchange between Jamaica and Panama, and other countries in Latin America where reggae has a strong presence. This liaison would see a revolving door opening up to the entire arts community, not just reggae and dancehall artistes.

“We want to bring more artistes and dancers and musicians and producers to Panama and Puerto Rico and Mexico and Colombia to do workshops. We want to take Stone Love and Frankie Music, other producers and dancers to the universities to engage the students and teach them about reggae and dancehall and the Jamaican culture. And we want our people to come to Jamaica to share our culture,” a passionate Chiqui Dubs told The Gleaner.

While in Jamaica, the producer and selector, whose tentacles stretch beyond the Spanish/Latin scene, actually paid a visit to the Panamanian Embassy to set in motion phase one of this project. Accompanied by Michelle Williams, regional director, Caribbean and Latin America, VP Records, Chiqui Dubs met with Dr Lasford Emilio Douglas, ambassador of the Republic of Panama to Jamaica. The discussions, he said, were “fruitful”. Mexico is next on his list.

Both Karims and Chiqui Dubs were eager to point out that Panamanians should never be considered culture vultures, because of the strong Jamaican community there, which formed with the building of the Panama Canal.

Chiqui Dubs, the 2020 winner of the Quarantine Sound Clash, explained, “Jamaicans are a part of the Panamanian culture. They brought the vinyl records, and we used to take the rhythm on the ‘B’ side and make real dancehall and reggae music – not reggaeton. Panamanians were the first to do this; from 1985. Reggaeton came after.”

Born and raised in Panama, a country noted for its cultural diversity, Karims pushed open doors in 2009 with the release of his début album, Capitulos, which had eight songs that struck a responsive chord with listeners.

His bio states that in 2012, on the tails of his success as an emerging musician and young artiste, he performed at the Cultura Profética concert. In the following years, with his songs in rotation on local radio stations, Karims shared the stage with Pressure Bus Pipe from the US Virgin Islands, performed on ReggaeJam in Panama with multiple internationally recognised artistes (2015) and at German reggae artiste Gentleman’s concert. where he performed his single Let me Kiss You off his album, Capitulos, with Randy Nota Loca.

Currently working on a new project, Karims shared his burning desire, “I hope I can hold that Grammy next year”.