Editorial | SOEs don’t have to be the default 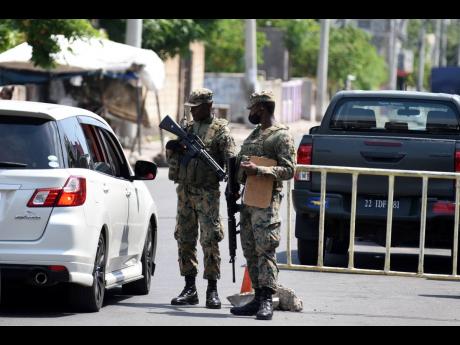 File
In this July 2020 photo, JDF soldiers conduct a spot check at a checkpoint in Greenwich Town during a state of emergency.

It is a safe bet that the 13 government senators will vote in favour of extending the states of emergency (SOEs) that are now in force in the parishes of St James, Clarendon, Hanover, Westmoreland, St Catherine and parts of Kingston and St Andrew.

It is unlikely that any of the eight opposition members will. It requires at least one of them to do so to achieve the two-thirds majority for the SOEs to continue seamlessly beyond its initial life of a fortnight. So, the expectation is that the emergency regime will lapse on Tuesday.

Moreover, despite Horace Chang, the national security minister, saying that there is no legal impediment to proceeding in that fashion, and SOEs emerging as the administration’s primary crime-fighting tool, the Government won’t roll over the SOEs by just declaring a new one when the current one ends. That, Dr Chang says, would not represent good governance, notwithstanding his declaration that “a government must have the right to act decisively in the interest of the country”.

The upshot: the country is back at a philosophical stalemate over when or how states of public emergency should be declared, especially if the deployment is because, as is now the case, law-enforcement agencies claim to have no other effective remedies with which to respond to criminals.

The situation calls for calm and rational discussion, rather than the political sniping that has characterised too much of the debate on Jamaica’s anti-crime strategy. Our starting position is always being wary of any schemes or arrangements that, except in the most extreme circumstances, carry the risk of infringing on constitutionally guaranteed rights and freedoms. States of emergency bear these risks.

Jamaica faces an endemic problem of violent crime, much of it spawned by a tribal political culture that encouraged deep partisanship and the creation of garrison communities, the zones of political exclusion sustained by party-striped enforcers, who have metamorphosed into largely autonomous gangs.

The Government and the police, led by former army chief Major Gen Antony Anderson, say states of emergency work in reducing murders, although there is no analysis that has been publicly shared of what elements are especially efficacious – and why.

The Opposition believes that the outcomes of SOEs are overhyped and that they, at best, offer diminishing returns. The longer they remain, the less they achieve. Further, like human-rights groups, the Opposition often raises concerns over the possible infringement of individual rights.

Prime Minister Andrew Holness insists that this ought not to be a fear of Jamaicans. He has, in the past, claimed that critics were engaged in “academic debate about the constitutionality” of SOEs “while people in Jamaica are dying”.

“The leadership of the JDF (Jamaica Defence Force) and the JCF (Jamaica Constabulary Force) are firmly in the corner of protecting human rights,” Mr Holness said in Parliament this week.

There may, indeed, be no reason to question the Government’s or the security forces’ commitment to democracy and human rights. However, there have been two separate court rulings, involving six men detained for long stretches under SOEs, that held that the measures as deployed were unconstitutional, including an argument in one of the judgments that regulations that governed the measure were too vague to meet the constitutional standard of being demonstrably justified in a free and democratic society if fundamental rights are infringed.

That the Government has appealed these rulings raises legitimate questions of whether, given that the same issues could arise again, it would not have been prudent to stay SOEs for policing purposes until the appeals are ruled upon.

Notwithstanding how much we may be inclined to trust Mr Holness and his administration on their question of commitment to human rights, a development this week reminds why these issues must rest on constitutionally protected principles, rather than faith in the goodness and decency of individuals.

MOTHERS OF THE PLAZA DE MAYO

Hebe de Bonafini died this week, aged 93. Although she became a polarising figure, Ms de Bonafini was a founding member of the Mothers of the Plaza de Mayo, the women who, starting in 1977, held weekly vigils in the central Buenos Aires plaza that gave them their name, They asked questions of the whereabouts of their children, who disappeared during Argentina’s ‘dirty war’. Ms de Bonafini lost two sons and a daughter-in-law during those political purges by the military dictatorship.

First, it was left-wing activists who disappeared. Then student activists. Soon, any critic was fair game, including two Mothers of the Plaza de Mayo.

We are inclined to say it could not happen in Jamaica. Yet there are memories of the political polarisation of the 1970s and 1980s, when Jamaica edged towards the precipice. And half a dozen years ago, most people might have denied the potential for today’s chronic dysfunction in US politics, and that America’s democracy could have teetered at the edge.

That, in part, is why this newspaper urges calm discourse on questions of security and policing, within the framework of the Social Partnership Agreement and the Crime Monitoring Oversight Committee. It is worth remembering, too, that states of emergency are not synonymous with policing strategy.