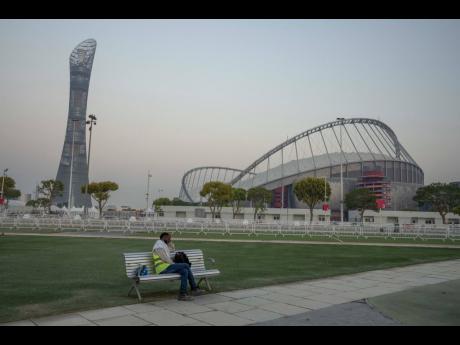 AP
A migrant worker sleeps on a bench before his early-morning shift, in front of Khalifa International Stadium, also known as Qatar’s national and oldest stadium, on Saturday, October 15.

Something smells off about this World Cup. And no, it’s not this unusual combination of international football, pepper lights, Christmas carols and tinsel. There’s something darker about the competition this year than ever before, and that includes...

Something smells off about this World Cup. And no, it’s not this unusual combination of international football, pepper lights, Christmas carols and tinsel. There’s something darker about the competition this year than ever before, and that includes the 2014 edition when Germany slaughtered Brazil 7-1.

For the first time in my 36 years of World Cup football, I am unmoved by any of the colonialist jibes that I usually endure when I put up my England flag, hat, scarf, jersey and WhatsApp pic. Heck, not even Argentina’s delightful Tuesday-morning heartbreak at the hands of the Saudis has given me the sort of immense joy I usually get when the wheels of that other South American bandwagon start to fall off. No. Something isn’t right about this World Cup.

Without a doubt, these feelings are surely being driven by the allegations of abuse, human-rights violations and corruption that have been awash over this tournament. It started as far back as 2010, when the decision to award the World Cup to Qatar was first made. That move was suspect, not just because Qatari summers often see temperatures exceeding 100 degrees, but also because of persisting rumours that Qatar greased the decision with oil money. Lots and lots of oil money. So much so that over a dozen FIFA officials, including ConcacaF’s very own Jack Warner, were later indicted on racketeering, bribery and corruption charges.

But come on. This wouldn’t be the first time that FIFA has come under the microscope over the conduct of its financial affairs. What’s so special about this Qatar World Cup? Well, in 2015, FIFA added more grist to the mill when it recommended that Qatar not only host a shorter World Cup, but do so over the cooler months of November to December. A winter break for the World Cup in the middle of the season for Europe’s big five leagues? How on earth could that work? How does that make practical sense? Of course, the European leagues were not amused, but in the football version of Game of Thrones, FIFA rules supreme over all kingdoms and jurisdictions, and so a winter World Cup it is.

But having pulled off those two audacious coups, why stop there? Qatari World Cup organisers then set about draping themselves in further controversy over allegations of human-rights abuses against South East Asian and African migrant workers. Qatar, it is suggested, withheld salaries, exploited workers, and violated numerous internationally recognised human rights, immigration and labour laws. To add further intrigue, work on the stadiums in Qatar has reportedly claimed over 6,500 lives, mainly due to the subhuman conditions which workers had to endure.

Next came the LGBT community, who have also been singled out at this World Cup. Homosexuality is not only illegal in Qatar, but can be punishable by death under Sharia law. This has raised concerns about the safety of fans at the event, homosexual and otherwise. Football fans have been known to be quite effusive in celebrating goals, and I shudder to think what could possibly happen to an overly exuberant straight fan who, unwittingly, jumps into his equally straight male friend’s arms following a Robert Lewandowski screamer.

Qatari World Cup organisers have assured us that there is nothing to fear and that everyone, regardless of their sexual preferences or orientation, is welcome. But then, in true controversial, bait-and-switch World Cup 2022 fashion, a Qatari government official has since said publicly that homosexuality was the result of a damaged mind, and so anyone coming to Qatar for the World Cup should “accept our rules here or don’t come at all”.

Several teams and countries have since planned protests. Australia has spoken out against Qatar’s human-rights violations, Denmark’s government and royal family have said they will not attend, and the English FA has promised to pay the fines if the Three Lions are sanctioned for wearing the OneLove armband, a symbol of support for the LGBT community.

FIFA’s response to the controversy was football’s version of ‘shut up and dribble’. The governing body has since urged World Cup teams to “focus on the football in Qatar and not let the sport be dragged into ideological or political battles”.

And this is where my own conscience starts to bother me.

WHEN IT’S ABOUT MORE THAN SPORTS

As a lifelong England fan, I get pilloried every year for supporting ‘the colonialists’. “How can you support England when they enslaved us, colonised us, and gave us the Spice Girls, the Westminster system and Marmite?” My response to them has always been to focus on the football and leave out the politics from the beautiful game. In other words, “Shut up and watch Messi dribble”. Because to my knowledge, Argentina has never fielded a black player at the World Cup, France only stopped collecting reparation payments from Haiti after the 2010 earthquake, and Germany … well uhm … Yeah. Let’s leave that one alone. In other words, like FIFA, I have always implored others to simply enjoy the beautiful game for the skill and drama that makes it what it is: Argentina will lose their first game, yet bumble and stumble their way back to the final, England will once again flatter to deceive, and Germany’s Teutonic efficiency will likely see them prevail over a high-flying (and high-diving) Brazil. It’s all part of the greatest show on earth.

Except that somehow, this year, that excuse rings a bit hollow. Human-rights violations should be condemned wherever they exist. Sports should never be used to whitewash a country’s transgressions. And corruption should never be overlooked, regardless of your team’s chances. That latter part really stings, because all of this is happening at a time when England’s attack is irrepressible, the midfield is buzzing, and molasses-slow Harry McGuire is thankfully injured and unlikely to take the pitch again. It’s a happy time to be an England fan. If only this World Cup wasn’t so smelly.