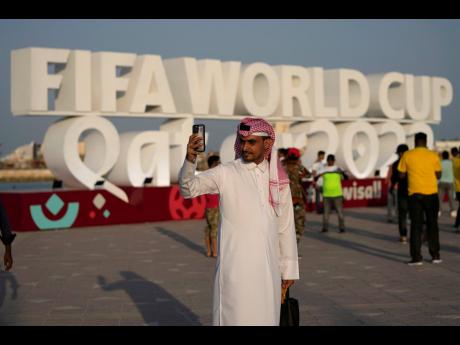 AP
Today, as the world’s most popular and viewed sport, the World Cup final tournament is watched by billions of people around the world and, indeed, is a major trade show for goods, team clothing, equipment and accessories, and services, contracts to individual players mainly, but even technical staff.

Well, the greatest show on earth, the International Federation of Association Football (FIFA) World Cup, the quadrennial men’s tournament, has started in Qatar and will end on December 18.

I have been watching the Football World Cup for as long as I can remember. I followed the 1970 World Cup mainly by reading Gleaner reports, listening to radio and TV summaries, and then viewing the tournament documentary at Carib cinema. I could name every member of Brazil’s 1970 World Cup team which won the then Jules Rimet Trophy.

Today, as the world’s most popular and viewed sport, the World Cup final tournament is watched by billions of people around the world and, indeed, is a major trade show for goods, team clothing, equipment and accessories, and services, contracts to individual players mainly, but even technical staff.

Football, as we now know it, was formally played in England in the mid-19th century and was taken around the world by the British as colonisers, settlers and mariners.

The first FA Cup was played in 1871 and the English football league was established in 1888. My father had regularly marked his football pools. Both the FA and League have avid fans around the world today.

The first football club was formed in Jamaica in 1893. Football is now a very popular sport throughout the Caribbean.

The first World Cup was played in 1930. Cuba was the first Caribbean team to participate in a World Cup final in 1938. Of CARICOM members, Haiti qualified in 1974, then Jamaica in 1998, and Trinidad and Tobago in 2006. Jamaica’s women’s team qualified for the women’s World Cup in 2019 in France and will be participating again in 2023 in the tournament to be hosted by Australia and New Zealand.

You will recall that when Jamaica’s Reggae Boys qualified in 1998 for the World Cup in Paris, France, it was seen as a great opportunity to promote Jamaica for trade and investments, and the same applied for Trinidad and Tobago’s Soca Warriors in 2006 when they went to Germany. From these outings, individual players got contracts to play in England. It also provides opportunities for players in the American League.

I do not know that there is much data verifying that Jamaica and Trinidad and Tobago benefited from increased trade, including tourism, and investments from brand recognition. In fact, here also, we encounter the problem of the lack of disaggregated data to determine the level of inflows from trade in sports services.

In September, it was reported that the director general of the World Trade Organization (WTO), Ngozi Okonjo-Iweala, and president of FIFA, Gianni Infantino, agreed that the two organisations would work together to examine how international trade and football could serve as catalysts for economic growth and social inclusion.

They signed a memorandum of understanding (MOU) which seeks to foster synergies in relation to the economic dimension of sport and empowerment, especially for least-developed countries (LDCs) and women. They will collaborate by exchanging views on their respective activities and by preparing and implementing common strategies and projects in areas of shared interest.

They will also work together in the development of publications, including a joint study on the economic impact of football and its role in unlocking global economic growth potential, and will explore options for the development of capacity-building activities that support the use of football as a tool for women’s empowerment, particularly in LDCs.

It is further reported that under this MOU, which will remain in force until December 31, 2027, the WTO and FIFA will exchange information and expertise on the economic dimension of football, through participation in conferences, regular meetings and contribution to studies. Once a year, a joint review will be undertaken to assess the collaboration and identify specific activities or projects to be implemented the following year. These activities and projects will be reflected in a Collaboration Plan.

It is interesting to see collaboration between WTO and FIFA.

There is a view that sports, including football, at the bilateral, regional and international levels can help to promote international trade, social cohesion and sustainable development. This may raise some scepticism as to whether building more stadia and manufacturing more products can contribute to sustainable development. In the case of Qatar, exploitation of migrant workers has been raised. There is also the question of to what extent benefits, direct or indirect, from participation in international sports are fully reflected in the gross domestic product (GDP) of countries like those in CARICOM.

Part of the WTO/FIFA collaboration, including the International Olympic Committee (IOC), World Athletics, Commonwealth Games Federation, and the International Cricket Council, could be a comprehensive study to determine to what extent small countries, like those in CARICOM, have actually benefited economically or could benefit more from their involvement in international sports competitions as participants and hosts.

In the meantime, I hope to enjoy the World Cup matches, if CVM’s coverage will allow.

Elizabeth Morgan is a specialist in international trade policy and international politics. Email feedback to columns@gleanerjm.com