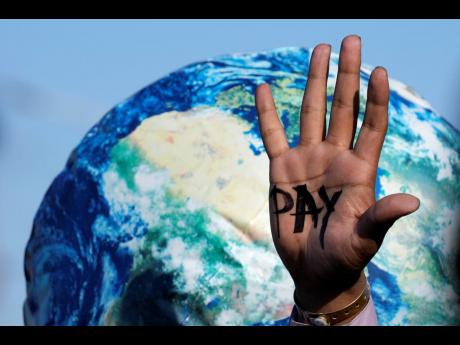 AP
Jamaica and CARICOM must consistently hammer the point to rich countries that it is their moral and legal obligation to pay.

The acceptance by the rich world of its obligation to help pay for global warming-related disasters in poor nations is a positive outcome of the COP27 climate conference. The proposal is legally and morally justified, and the facility is one that should be rightfully accessed by the countries of the Caribbean, including Jamaica.

But given the track record of rich countries, the historic big polluters, in delivering on their climate undertakings, we will not hold our breath. Notwithstanding, Jamaica and its partners in the Caribbean Community (CARICOM) – vulnerable small island developing states (SIDS) – cannot relax now. Over the next year, until the UN climate conference convenes next in Dubai, they must be relentless in seeking to ensure that the group charged with designing a workable arrangement does not renege on its mandate or short-change developing countries.

Unfortunately, but for the eleventh-hour breakthrough on the so-called ‘loss-and-damage’ deal, it cannot be said that the conference in the Egyptian city of Sharm el-Sheikh achieved much to advance the aim of keeping Earth’s temperature from rising by no more than 1.5 degrees Celsius by the end of the century, compared to the pre-industrial period.

As of now, science indicates that the world remains en route to significantly overshooting that target. Yet, there were no significant undertakings by the countries to accelerate their reduction of greenhouse gases, or to enhance the pace of investment in technologies to replace fossil fuels, which lags behind what is required to significantly avoid the looming climate crisis.

Recent modelling suggests that meeting the temperature goal would require a 43 per cent reduction in emissions by 2030, relative to the 2019 level, and that the world would need to invest US$4 trillion annually to achieve net zero emissions by 2050. More broadly, transformation to a global, low-carbon economy would require investments of up to US$6 trillion a year.

Developing countries, whose already-high debt is often exacerbated by the climate crisis, collectively need, by 2030, to invest an estimated US$5.6 trillion to meet their Nationally-Determined Contributions to the reduction of greenhouse emissions.

However, financing support by rich counties to help poor ones (which did little to cause the crisis) to transition to renewables and adapt to climate change, has not materialised at the pace, or to the extent, promised under the 2015 Paris Agreement.

At Paris, rich countries committed to, by 2020, mobilise US$100 billion a year for a support scheme. But at Sharm el-Sheikh, delegates, as they did in Scotland last year, again expressed concern that the goal “has not yet been met and urge developed country parties to meet the goal”.

It is against this backdrop that we are sceptical that rich countries have the will to deliver on their promises, or that they will follow through on obligations under the loss-and-damage scheme, whose outline is to be ready in a year’s time.

Conceptually, the proposed loss-and-damage scheme is not the same as financing for adaptation to global warming and climate change. While countries adapt to the effects of a hotter climate, many simultaneously face, and have to contend with, the expensive challenges of past or current events.

For instance, over a six-year period, between 2011 and 2017, CARICOM member Dominica lost an accumulated 350 per cent of its gross domestic product (GDP) to weather events – Tropical Storm Ophelia (2011), Tropical Storm Erika (2015) and Hurricane Maria (2017). The events – and in the case of Maria, the ferocity – respectively left damage to the value of 40 per cent, 90 per cent and 220 per cent of GDP. Jamaica has fared better, but in the decade up to 2010, natural disasters cost the island an estimated US$1.2 billion.

These events, like others in the region, have been linked to climate change. The moral case for rich countries – the historic drivers of global warming – to help poor nations to recover from these catastrophes is unimpeachable. The legal one is profound.

Rich countries, though, have until now mostly baulked at the obligation. Indeed, merely getting the matter on the agenda of COP27 was a significant victory for developing countries. Having agreed to go forward, the question will now be whether developed countries will actually put their money where their mouths are.

Firstly, in the United States, the agreement’s last holdout, Congress will have to approve any financial undertaking by the administration. When the Democrats controlled both Houses of the legislature, the Biden administration got less than half of what it asked for to support climate initiatives overseas. From January, the House of Representatives will be controlled by the Republican Party. That party is not enarmoured with climate matters. There is uncertainty, too, how partial China and other emerging economies will be to this fund.

The bottom line: there will be many opportunities for this scheme to go awry, if not become stillborn. But Jamaica and CARICOM must consistently hammer the point to rich countries that it is their moral and legal obligation to pay.