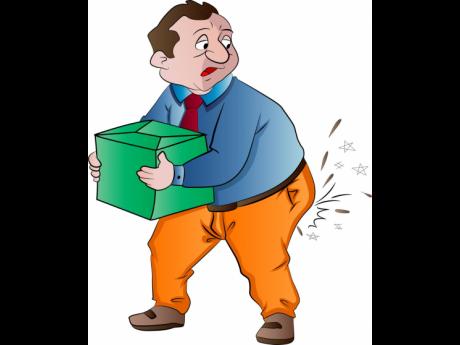 Do you remember those little tongue-twister games we played, like, “Robinson Crusoe shaved his beard with a rusty, rusty razor blade”, “She sells seashells by the seashore”, and my favourite, “Mr Smith ship sink.”? My US-based friend, Keith, asked...

Do you remember those little tongue-twister games we played, like, “Robinson Crusoe shaved his beard with a rusty, rusty razor blade”, “She sells seashells by the seashore”, and my favourite, “Mr Smith ship sink.”? My US-based friend, Keith, asked me to collect a package from customs in Trinidad. It was being brought by the Laparkan Shipping Company which many consumers have given a one-star rating for unreliability. I didn’t tell Keith that, when we were leaving Antigua to come back home to Trinidad, we got a cost estimate for transport that was clearly padded by the company’s representative, most likely for his own financial benefit. We dealt directly with the shipper and saved ourselves a lot of time and money.

Keith assured me that Laparkan assured him that the package would be delivered in a week. When three weeks passed and there was no sign of arrival, I knew that ship talk was back in town with a vengeance. Not just kids but most Caribbean politicians and people in authority talk a tonload of ship. A few years ago, the Trinidad health minister, perhaps tired of ship talk, invented “sit” talk. He preached, “We have to start to introduce into the national conversation a new disease called the sitting disease … . We drive to work, sit down whole day … . The fact is, we sit too much.” If he were an American Indian and not a Trini, his comment would have earned him the name Sitting Bull.

Which was what happened to me when I was told by Laparkan to come and collect. You have heard about crabs in a barrel but what about crabs out of the barrel and in charge? Waiting for hours in the Government’s ‘Barrel Shop’, I was like fish in a barrel. Worse, not knowing my way around, I was also a fish out of water surrounded by sharks. Keith had sent the package to ‘Tony Deyal’. Unfortunately, my name is Anthony, but my friends call me ‘Tony’ for short and have been doing this for a long time. I had to go to the nearest town and find a commissioner of affidavits to confirm that ‘Anthony Deyal’ and ‘Tony Deyal’ were the same person. I was told it should cost about TT$70. When the document was completed, I asked the commissioner, what it cost, he first said “A 100” but then quickly changed it to “200”, which I had to place on a sofa loaded with $100 bills.

I went back to the warehouse, paid a relatively huge sum to Laparkan, and then had to sit outside in a ‘government’ tent in really scorching sun for hours. I asked myself what it was like in other Caribbean countries where we barrel people have no choice but either to line up or sit with others in the same boat. In Barbados, there was a flurry of complaints of missing items from the thousands of sealed barrels and boxes that were shipped. In Guyana, there are constant reports of goods missing in barrels, and cries for help to stop the ‘advantage’ that is being taken of the many who receive barrels. In Jamaica, the problem is the same. Stolen barrels, high costs and the same long or longer waits. There is also the plight of the ‘barrel’ children whose family, generally mothers who are in the US, send them stuff but, as child welfare consultant Dr Claudette Crawford-Brown says, “What can’t be shipped in these containers and is therefore missing from the lives of these children, is emotional nurturance.”

Waiting in the hot sun for my name to be called, I could have done with some nurturing myself. I tried to get some information from my phone. Nowhere could I find how many barrels are shipped to the Caribbean every year. While one New York company says it ships 500 per day during the pre-Christmas period, the total brought here by Laparkan and others has to be astronomical. By that time, waiting in the sun, I was getting gastronomical. There was no water available and I suppose that justified not having a washroom either. I wondered whether this kind of treatment was the same my other ‘barrel people’ got in their countries. Then, called into the air-conditioned ‘sanctum sanctorum’ to get my stuff, I had to marvel about the difference and wonder whether it was a trap set by Dr Strange to pounce on me.

In the air-conditioned area waiting and paying different sums for bits and pieces of the process, I was in deep sit once more. I had nothing to do but wait and so I tried to quench my thirst with my favourite drink, coffee. The coffee machine in the air-conditioned area was selling what my father used to call “Nest Coffee” and it boasted “Relaxation sold here”. My eyesight was so bad from the long time in the sun and coming into the cold that I read it as, “Real laxative sold here”. Then the boredom made me pull out an old coffee shop joke. Two women drinking ‘Nest Coffee’ in a café were talking about the men in their lives. One said, “Men are all alike.” The other replied, “I agree with you. Men are all I like, too.” Slick talk to pass the time and make the trip to pay at three different points and stand waiting to open the boxes Keith sent to satisfy the Customs that, instead of real weapons, all I had was gun talk.

The customs people were really nice and helpful. Also the men bringing the boxes and barrels out for the customers to open and place on the table to be examined. What was not acceptable, and I had to take it in my stride, was the system and the lack of concern for people. Again, I felt the pain of people in the other Caribbean countries, the grandmothers taking care of the barrel children and the many who believe that, either on the ship or in the bond, their goods were stolen. Then there are people like me who have experienced this approach and attitude from all the governments in Trinidad and the rest of the Caribbean where I lived and worked for so long. Should I just grin and bear it, keep my mouth and computer shut, or, like the poet Dylan Thomas, rage against the dying of the light? Unfortunately, to go back to a ship story, people like us are all dinghies in this armada.

Tony Deyal was last seen asking, “What do you call a boat full of politicians and government bureaucrats?” A d**ktatorship. Send feedback to columns@gleanerjm.com