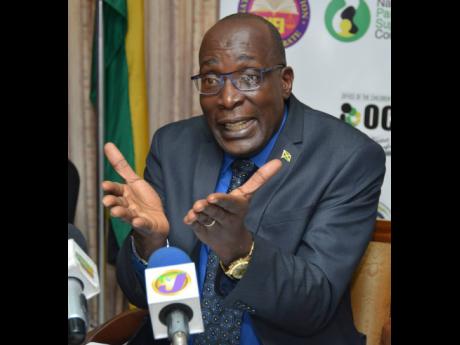 Ruel Reid is innocent of all charges (until proven guilty), but NOBODY is entitled to seven years’ full-pay leave from any job.

During a pizza break in one of our Saturday afternoon domino games, Haemorrhoid was tempted to tell one of his shaggy dog stories.

Regular readers have long been acquainted with Ernest H. Flower, whose nickname came from his lazy lament about “piles and piles” of files on his desk combined with his convenient middle initial. Although he couldn’t distinguish a domino from a tarot card, as a world-class raconteur, he was a welcome spectator.

This time, Haemorrhoid was commenting on the Dunce’s mantra “if a macca mek it jook yu!”, which was often his only spoken words. Haemorrhoid said the Dunce reminded him of a certain parrot.

“A man saw an amazing parrot in a pet shop one day. It could recite lines from Hamlet and sing arias from Tosca .

Stunned by the parrot’s intelligence, the man paid the shop owner US$1,000 for the remarkable bird. He agreed with the shop owner that this parrot was unique and worthy of becoming a lifetime companion.

He took the bird home and he waited for it to entertain him. After one month the parrot had not uttered a word.

Upset, the man returned to the pet shop. The shop owner reminded the man that the parrot was reciting Shakespeare when he bought it. ‘I’ll take the parrot back and out of the goodness of my heart, I’ll even refund you half of what you paid.’ Reluctantly, the man agreed and left the shop US$500 poorer than he was one month earlier, and without the bird.

Then the parrot turned to the shop owner and said, ‘Don’t forget, my share is one-third!’”

The recent ‘Hot Patty’ game between Jamaica College’s (JC) Board and the education minister was so embarrassing, it reminded me of Haemorrhoid’s tall tale. Also, it’s another example of Jamaica’s warped governance system. If JC’s board isn’t in charge of JC, then who the devil is? Why appoint a board?

WRONG FROM THE BEGINNING

NOBODY got it right. Ruel Reid is innocent of all charges (until proven guilty), but NOBODY is entitled to seven years’ full-pay leave from any job.

It went wrong from the ‘secondment’. The Education Regulations provide:

“ 53-(1) A member of staff of a public educational institution may, with the approval of the Minister upon the recommendation of the Board, be seconded for duty in another public educational institution or in an approved government agency or organization [on no less favourable terms], for such period not exceeding two years and on such terms and conditions and in such circumstances, as may be approved.”

Cabinet is NOT “another public educational institution or in an approved government agency or organization”. It’s the constitutional home of Jamaica’s Executive. Cabinet has authority to approve statutory agencies or organisations for ‘secondment’. It can’t approve itself. It’s an obvious conflict of interest to be education minister and JC headmaster. It shouldn’t happen.

The game of ‘hot patty’ (apologies to @findpatria) included JC recommending Reid’s ‘special’ leave be extended for five years, but it was vetoed by the education ministry. So, instead of being paid monthly for five more years not to work, ‘settlement’ negotiations handed him a large, upfront lump cheque in exchange for not working. Government insists it’s not contributing a penny. But JC, long ago, told us Government, not JC, was paying Reid during ‘special leave’. WE KNOW JC is a public school. So, WE KNOW a way can be found for taxpayers to continue to pay for government neglect. Or worse!

PM Holness in Parliament (November 16) announcing a $16-million Christmas Work Programme: “We are in a different era of accountability, and our supporters need to understand it’s not [about] taking up cash and just giving it out. Those days are gone. Work must be done for this income.”

Gordon Robinson is an attorney-at-law. Email feedback to columns@gleanerjm.com .