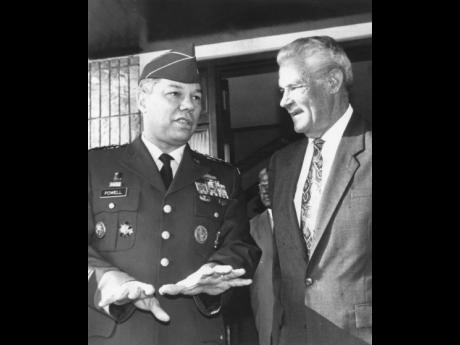 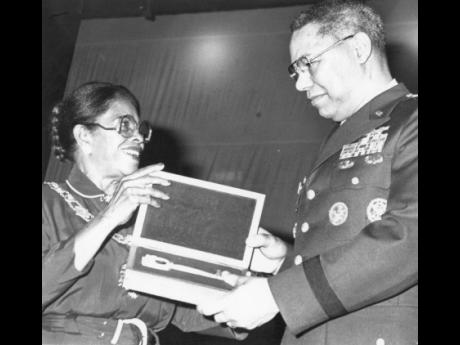 File
Kingston’s Mayor Marie Atkins presented General Colin Powell with the Key to the City of Kingston during his visit in 1992. File Photos
1
2

On Monday, we learned about the passing of Colin Powell from “COVID-19 complications,” according to reports from his family. They also revealed that he was fully vaccinated.

But it appeared that he had some comorbidities, or underlying health conditions, so sadly, he succumbed to the coronavirus.

But whatever the difference, people will draw their own conclusions about Powell’s death, and its relationship to COVID-19.

So those who don’t believe in the COVID-19 vaccines will say: “I told you so, that although you are vaccinated against the virus, you can still die from, or because of, it.” So they will be shored-up in their skepticism and rejection of the vaccines.

Yet, others who believe in the efficacy of the vaccines will say: “Powell had comorbidities, or underlying health conditions; he was also in his 80s; coupled with the fact that COVID-19 vaccines are not a cure for COVID-19, so there will be casualties and even deaths after getting the shots. But still for all, the benefits of the vaccines outweigh the risks of being harmed or killed by them.”

Such debates for or against the vaccines will continue to be waged.

However, it is not the way he died that I want to draw your attention to, but the way he lived. More specifically, about Powell’s connection to Jamaica, and what I discovered about him some time ago. Some of the details about him are based on his book, My American Journey (Random House 1995).

Retired General and former United States Secretary of State Colin Powell was a four-star general born in the US, but his parents were Jamaicans. He rose to occupy some of the highest offices in the US army and government. But he has never forgotten his Jamaican heritage.

This précis of his association with Jamaica is taken from his autobiography, My American Journey.

HIS VISIT TO JAMAICA

Colin Powell visited Jamaica for the second time on February 13, 1992, at the invitation of Michael Manley. While here, he went to the Ward Theatre, where Marie Atkins, the then Mayor of Kingston, presented him with the Keys to the City. He then referred to Jamaica as his second home after America. Counsellor Ezra Cole, at the time of Powell’s visit, declared that “General Powell is a true Jamaican”. Powell is familiar with Louise Bennett and her Jamaican idioms. He eats plantain, curried goat, and rice and peas.

He visited Up Park Camp where Commodore Peter Brady gave him a tour of the camp, and had him inspect the troops. From Up Park Camp, he boarded a Jamaican helicopter to go to Norman Manley International Airport, where he was to transfer to an American Black-Hawk helicopter to visit US units working in Jamaica. But the Jamaicans wanted to fly Powell and his group on the Jamaican helicopter, to show their pride in their recently acquired US-built machine.

But no sooner than the helicopter was airborne, it got into trouble and started to drop to the sea. The Jamaican pilots, however, managed with great skill to land the chopper to safety a few yards from the water’s edge on the shore-line. So Powell, his wife and others in his travelling party were lucky to escape with their lives. He had nothing but great praise for the skill and courage of the Jamaican pilots.

Michael Manley, on hearing the news of Powell’s and his team’s narrow escape, phoned him, and was greatly relieved that Powell was unharmed. But uppermost in Powell’s mind, though, was the thought of how ironic it would have been if the land of his parents’ birth had become the place of his death.

After this near-fatal incident with the helicopter, Powell and his team were then put on board the American Black Hawk that they were to have been on in the first place. He was then flown to inspect some US-funded projects, including, a road being built in Jamaica, and to see a US Airforce drug-tracking station at Lovers’ Leap.

After the official engagements were over, they piled into jeeps and drove into the deep country area where Jamaican officials, such as the custos, the police and others, greeted him and his party. Then, as they travelled these dirt tracks, the country people came out of nowhere in large numbers to meet and greet Powell and his group. The people of the district sang, cheered, and clapped on seeing Powell and his entourage.

Then a small group of people, separate from the main crowd, appeared, who turned out to be Powell’s family. He was in Top Hill, St Elizabeth. There he met his family clan: aunts, uncles, and cousins. He then went into one of the rustic cottages – there was no running water, no electricity, no kitchen, no indoor plumbing; and, chickens were running around the yard. This was the house where his father, Luther, in 1898, was born.

He visited his family’s burial plots, said prayers over the graves of his grandmother and grandfather, and before leaving his family and relatives, they exchanged small gifts between themselves.

From Top Hill, he then flew to Westmoreland, the birthplace of his mother, Maud.

During his visit to his parents’ place of birth, he wondered what had prompted them to leave their native soil, to emigrate to a foreign country, the USA, so different from their own. He marvelled at how that act of courage had shaped his own destiny.

Most of his parents’ brothers and sisters stayed in Jamaica, and their children have done well in Jamaica and in the countries to which they have migrated. But Powell thought that when the Jamaican Government took a socialist turn in the 1970s, that path wrecked the economy; as a result, more of his relatives left for Miami.

Naturally, Manley’s allies will contest this view of Powell’s and lay the blame for many of Jamaica’s economic and social problems during the ‘70s at the feet of the US administration, of which Powell was a representative - at the time a decorated US military man.

Powell had visited Jamaica once before this 1992 trip. His first visit was in 1961. He was then a First Lieutenant, having served two years in Germany. Now back at Fort Devens in Massachusetts, he decided to ‘go back home’, with his wife accompanying him. He was thrilled at the sunlight and lush vegetation of Jamaica. His family also greeted him with great joy and happiness, but expected goodies from America.

Before he could have got an army commission in the US, he had to give a list of relatives living abroad. He totalled 28 Jamaicans as nearest relatives. While in Jamaica, Powell noticed that Jamaica was a very matriarchal society; that the women were hard-working and very disciplined; that they set the standards, raised the children, and drove them to succeed. He noticed that many men-folk, in contrast to the women, were not pulling their weight.

Growing up in New York, the Powell family and himself kept up the Jamaican culture. So for instance, on New Year’s Day they ate curried-goat and rice, and drank Appleton Rum. He loved calypso music. In addition, he said that most of the time, various members of his family or the community would talk about ‘goin’ home’ – back to Jamaica.

But there was his Uncle Shirley who’d rebuked these other family members about their ‘going back home’ talk. One day, he told them: “You damn fools…you forget why you left?” But although most of his family couldn’t go back to Jamaica, they retained a strong affection and nostalgia for their country.