Editorial | The gender of politics 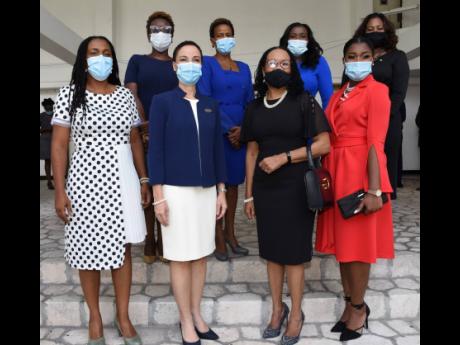 For a brief period last weekend, Icelanders believed that theirs was the first country in the European Union to elect a majority of women to parliament, the Alþingi. Initial election results gave women 33 of the 63 seats in the legislature – 52 per cent. But after a recount in western Iceland, women lost three seats, leaving 30 members of parliament (MPs), 47.6 per cent of the members and equal to the highest number of women previously reached in the Alþingi.

Iceland’s flirtation with history, and Sunday’s vote for a successor to the formidable Angela Merkel after her 16-year reign as Germany’s chancellor, are potential openings to reviving a discussion that takes place in fits and starts in Jamaica and has gone quiet since the island’s last parliamentary elections a year ago: how, or if, Jamaica should build on the successes of women in those elections, and what ought to be expected of females once they enter the legislature.

The 18 women who now sit in this country’s House of Representatives is the most ever, accounting for 28.5 per cent of the legislature’s 63 members, an increase of 11 percentage points on the number in the previous Parliament. Significantly, too, the 30 women who contested the election was also a record, a quarter more than in 2016. The Inter-Parliamentary Union’s (IPU) 2020 annual review of women membership of parliaments attributed Jamaica’s increase in female candidates, in part, to Kamala Harris’ attempt to be the Democratic Party’s candidate in the US presidential elections and, afterwards, her selection as Joe Biden’s running mate.

“Harris’ father is of Jamaican descent,” the report noted.

Whatever the merit of the report’s claim about Ms Harris’ influence – for which there is little evidence beyond the assertion – the island still lags behind many of its global and Caribbean peers in electing females to its legislature although the island has a long history of women serving in Parliament.

Indeed, according to IPU data, Jamaica ranks 63rd among 191 listed countries that have women serving in elected Lower Houses or unicameral legislatures. Among its Caribbean Community partners, the island follows Grenada, which is eighth in the rankings, with 46.7 per cent of its MPs being women. Guyana is 39th (35.7 per cent) and Dominica is 42nd (34.4 per cent). Rwanda remained at the top of the list; 61.3 per cent of its representatives are female. It is followed by Cuba (53.4 per cent) and Nicaragua (50.6 per cent).

The ascendency of men in parliament is mirrored elsewhere in political leadership despite a woman, Portia Simpson Miller, having led the People’s National Party and becoming prime minister, thus far the only female to serve in the position. Mrs Simpson Miller’s Cabinets, both during her first premiership, between 2006 and 2007 and then in the 2010s, were dominated by men. Apart from the prime minister herself, women mostly occupied the so-called ‘soft’ portfolios. In Prime Minister Andrew Holness’ current administration (his Jamaica Labour Party has 14, or 78 per cent, of the female members of the House), only three women are full members of the Cabinet, which, until Floyd Green, the agriculture minister, was recently forced to resign for breaching COVID-19 lockdown rules, numbered 16.

The irony of this male domination of political representation and government is that women tend to be the backbone of political parties – the ones who do most of the on-the-ground organisational work though not usually tapped for leadership roles.

Part of the reason for this, analysts say, is that in addition to their regular work, women take on most of the chores at home, including taking care of children, leaving them with less time to undertake front-line political representation. But there is the argument, too, that what happens in politics reflects the glass ceiling Jamaican women are likely to meet elsewhere in the society, including in the world of work. At workplaces, they dominate in the middle, but few break through to the top.

It was a view that Mrs Simpson Miller held, even when she was prime minister, and against which she felt political parties should take action to rebalance in politics. “We cannot sit back and feel comfortable because a few women have been able to break through the barriers and create history,” she said at a 2014 function celebrating her 40th anniversary in politics.

Not much has happened since then by way of declared affirmative action by the parties to ensure better gender balance in representation although over 50 per cent of the population is women and females are increasingly better educated than Jamaican men. On the campuses of the island’s universities and tertiary-education institutions, upwards of 70 per cent of students are likely to be women. No deep statistical analysis is required to conclude that Jamaica, like much of the rest of the world, is not doing enough to attract potentially good female talent to politics.

In this regard, this newspaper is supportive of efforts to achieve greater gender equity in politics. That political parties should have systems to support women who have families is one way. But we are also sympathetic to the idea of political parties introducing quotas to increase female participation. These might be gender-neutral arrangements, with a party saying, for example, that a minimum one-third each of its candidates in an election have to be women and men, respectively. At least, the matter deserves serious debate.