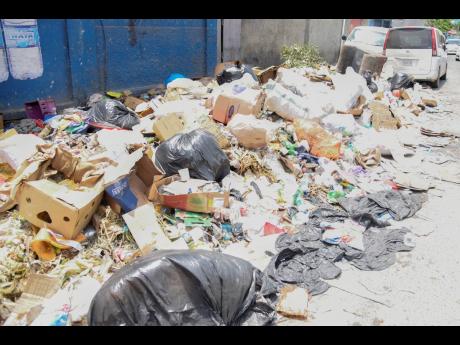 Jamaica has been struggling with its waste-management system for many decades, and there are alarming signs that the garbage problem could develop into a major public-health issue. Mountains of garbage are piling up in cities, towns, and makeshift dumps, and persons say they are being sickened by garbage pollution.

The inability of the National Solid Waste Management Authority (NSWMA) to effectively collect and dispose of tons of waste generated by households and businesses has resulted in residents being confronted by the stench of rotting animal flesh, along with infestation of flies, rats, and other vermin that feed on fetid garbage. The public-health implications are enormous.

Not only is the NSWMA not effective at collecting trash, it has not been able to successfully educate citizens on recycling, composting, and other waste-mitigating action and strategies. Years of talk and clean-up campaigns have yielded negligible results.

The municipal dumps are not properly managed, and as we have seen from time to time, methane-filled plumes of smoke emanating from these sites are released into the atmosphere to the detriment of the people and the environment.

NSWMA executive director Audley Gordon has all but admitted in media interviews that the agency is unable to cope. Although if one listened to the glowing report card presented by Minister Desmond McKenzie in his contribution to the 2021 Sectoral Debate, one may be convinced that the agency is on solid footing.

After bragging about the mobile app meant to identify those who litter and dump garbage illegally and the training of environment wardens, he said: “The NSWMA continues to demonstrate sound management by earning its own revenues amounting to $440 million over the last fiscal year.”

He continued: “The agency continues to be an outstanding example of what can be achieved with major investment from central Government, bold and innovative leadership and a dedicated workforce.”

But a chastened Mr Gordon, confronted by images of garbage heaps all over the country, enumerated the problems faced by the agency. First, he said there were not enough trucks. They were promised 120 trucks in 2020. They got 20, with no indication of when the others will be delivered.

Added to that, the NSWMA is unable to pay, in a timely fashion, the contractors whose trucks are used to move garbage. In some cases, there are reports that contractors have not been paid in months.

Then there is another factor: the recklessness of citizens who wantonly discard their garbage anywhere only for it to contaminate the waterways around us. This is happening despite the creation of the app and hefty fines for littering and illegal dumping.

If the Government is serious about enforcement, it could consider setting up special courts to deal with environmental crimes. It could also consider imposing a cess on households, with the funds being earmarked for improving collection and disposal of trash.

When will Jamaica, a country that depends on visitors for its survival, get to the point where it can be ranked as a clean and environmentally friendly destination? That question takes on additional weight because more and more tourists are considering environmental metrics when they make vacation decisions.

The kind of smugness displayed by the minister in reporting on the performance of the NSWMA sadly smacks of short-sightedness. What hope is there for meaningful change if an agency such as the NSWMA is not held accountable for its stewardship?

The problem of garbage is a global concern, and developing countries face grave difficulties in resolving the problem. Yet there exists a slew of new technologies that are being used to transform waste disposal into a profitable business, with generation of electricity among them. There are, in fact, companies that have developed a sustainable business model using new technology.

We acknowledge that it is an expensive activity and that there are not enough tax dollars available to make the adjustments to monetise waste. Government has demonstrated that it is incapable of devising the proper systems to fund and manage this activity. It should do the right thing and divest the service.