Editorial | Getting to the root of the oxygen crisis is important 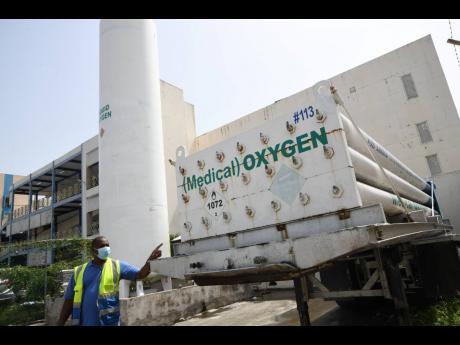 Ensuring the accountability of public institutions is not always easy. Their oversight arrangements are not necessarily given to transparency. And their managers tend to perceive the public’s questions as an assault on their personal well-being. So at the first request for information the default, most often, is to circle the wagons in reinforcement opacity.

That, though, is not this newspaper’s expectations of people in the health sector, who, beyond their obligations as bureaucrats, are sworn to operate by ethical and moral codes that rest first on what is in the interest of, and good for, individuals and the society. It is against this background that we continue to believe robust, good-faith effort is necessary by the health ministry to determine, as fully and accurately as possible, the number of patients whose deaths in Jamaican hospitals over the weekend of August 26-29 were because of a shortage of oxygen. A similar exercise should be conducted for deaths over the weekend of March 12-14, when there was also an oxygen shortage.

Such a review should be a personal mission of the island’s chief medical officer, Jacquiline Bisasor-McKenzie, upon whom, as the accountable officer – and critically, as a medical doctor sworn to the Hippocratic oath – the responsibility falls. We appreciate, as Dr Bisasor-McKenzie pointed out, that determining the specific contribution of the shortage of oxygen to the deaths of people who were severely ill with COVID-19 may not be easy. However, such determinations, to a close degree of probability, are not beyond the capability of medical science. Indeed, even in the absence of autopsies, a robust review of patients’ treatment dockets and interviews with doctors and nurses should provide a good idea of the impact of the oxygen shortage.

Gathering this information is important on at least two bases. One is to inform and help in the hardening of the supplies procurement processes and logistical planning mechanisms in the health ministry. The other is for policymakers and managers to understand the human consequences of failures on these fronts.

The August oxygen shortage came in the midst of Jamaica’s ongoing third wave of the COVID-19 epidemic. During that month, based on health ministry tracking data, 15,245 new cases of the coronavirus were confirmed. Further, between the beginning of August and September 8, Dr Bisasor-McKenzie reported last week, there were 465 known COVID-19-related deaths. Another 109 deaths were being investigated for cause.

IS NOT PUBLICLY KNOWN

However, the overall as well as the disaggregated numbers of deaths for the August 26-29 period, or for the days leading up to or after that weekend, are not publicly known. Those numbers, whether the deaths were from COVID-19 or other respiratory-related illnesses, or for that matter, any death involving a case in which the patient may have required oxygen, are important. The shortage of oxygen during the period made them so given that officials were forced to limit hospital admissions to dire emergencies as well as suspend elective surgeries because of the crisis.

Dr Bisasor-McKenzie explained that the “pathology of severe COVID ... is such that most deaths are going to result from failure or multiple organ involvement, and hence it will be difficult to say that a cause of death was due to reduced oxygen supplies”. Perhaps!

That, however, does not mean that we should not try. And neither does it say that there is a lack of expertise to get close to the truth of deaths and why the crisis occurred for a better understanding of how to prevent such problems recurring.

It is recalled that a similar oxygen crisis happened in March during Jamaica’s second COVID-19 surge. That was followed by the announcement of plans to improve oxygen supplies to health facilities. Yet, in the latest problem, both parties – the oxygen suppliers, Industrial Gases Limited (IGL), and the health authorities – blamed each other. The former accused the latter of weak forecasting. Health officials said IGL failed to meet its commitments.

Whatever the truth of this matter, things must not be swept under the rug. Getting the facts out and a credible strategy for fixing the problem are important to strengthening public trust. Clearly, systems failed with respect to the management of the procurement and delivery of oxygen to Jamaica’s hospitals. And that is likely to have contributed to the loss of lives. How much so, people have a right to know.