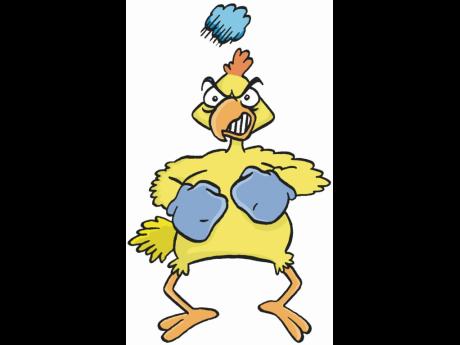 Elementary schools in the ‘50s started with a prayer and, the closer you were to the ‘exam’ group getting ready for your shot at the equivalent of the ‘Eleven Plus’, the longer were the prayers and the harder, and more often, the beatings from your teachers. If some little scab in the school knew you got ‘licks’ from the teacher and told your parents about it, then you also got a whipping or ‘belting’ at home. In some schools, the headmasters or ‘Principals’ were your teachers and they, like the one I had, all worked their tempers into a lather and took it out on you with a leather. Like the singing duo, Sonny and Cher, the beat didn’t just go on. It morphed into the Energizer Bunny and kept on going and going and going ... .

The other thing that all teachers did was to try to shake and wake you with some rudimentary exercises as soon as class started. It was like a combination of a robbery and a cricket match. “Hands up! Out! Up! Out” and finally “Down!” Now, here I was, about 65 years later, agreeing to do an online session with a group of youngsters, taught by my Facebook friend, Indira Devenish, who were locked into their homes, like me, because of COVID-19, and whose teachers (and their students) needed a break from the routine as well as a bit of variety.

So, there I was, behind my computer, looking at these kids from the Arima Centenary Government School on theirs. As I explained to them, even though it was nine in the morning, I still needed to wake them up and get them thinking. So I would do mental rather than physical exercises. I told them about the four Caribbean countries in which, by the time my younger children were eight years old, we had called home and added questions like, “What do you call the people of Barbados?” “Barbadians” from most, with a few “Bajans, sir!” I then asked, as part of the warm-up, a few easy ones to start. “What did the carpet say to the floor?” Some knew that one, “Stick ‘em up, I’ve got you covered.” “What did the ocean say to the beach?” Nobody knew it was, “Nothing. It just waved.” Then one from science that was harder. “What travels faster, heat or cold?” I asked the question twice but, while I got some responses, including the right answer, “Heat”, there was no explanation or rationale. I then made it easy for them, “Heat is right. Why? Anybody can catch a cold.”

WENT TO THE JUNGLE

I then went to the jungle. “What kind of gun would you use to shoot a green elephant?” I got everything from an AK47, Colt45 to shotgun. None was right. The answer was “a green elephant gun”. Then I asked, “What kind of gun do you use to shoot a pink elephant?” A few went back to heavy artillery but most of them, thinking they were right, exclaimed triumphantly, “A pink elephant gun!” Aha! Then I told them the truth. There is no pink elephant gun! They were stunned. “What you have to do is to take the pink elephant, paint it green and then shoot it with the green elephant gun.” I wrapped up the session with what in the gym we call a cool-down. “What lies at the bottom of the ocean trembling?” A nervous wreck. Then “What did the big chimney tell the little chimney?” (Son you’re too young to smoke) and “What did the parents say when their son wanted to play the drums?” Beat it!

Having done elephants making sure I left out their behaviour when they had too much alcohol (trunk and disorderly), I moved on to some real bird stories from Belize and Antigua. But, first, I went into some of the traits that make birds what they are. I winged it. Humming birds can’t remember the words and this is why they hum. The strongest bird and the one that can carry the most weight is the crane. The bird that is completely out of shape and always has trouble breathing is the Puffin. Then, what is the bird that whenever you eat or drink is always there? A swallow. I also mentioned in passing that Antigua was the only country which ever had a bird as its prime minister. His name was Lester Bird.

I went on to tell stories about the extreme intelligence of crows, how we got the little brownish dog I named ‘Crix’, and then when I saw his little son, all white like an Egret or what we call a ‘Garling’, I took one step further and called him ‘Bunjie’. They were all ‘pompecks’ or supposedly a cross of Pomeranian and Pekinese. However, I saw them as ‘lap’ dogs because they were always hungry and ‘lapped’ up everything in sight. There was the little red-headed woodpecker that is in the Guinness Book of Records because it has the “highest G (for Gravity) force experienced by a bird”. There were the crows or what science magazine called ‘feathered apes’ the brainiest birds of all time. Given a complex problem and an assortment of tools, New Caledonian crows came up with a creative solution that demonstrated their higher-order thinking. This led me to wonder why the collective noun for crows (which the students researched) is ‘murder’ – a ‘murder of crows’. So, I asked, “What kind of crow always sticks together with his murder?” Velcrow. “Where do crows go to get drunk and disorderly?” A crow bar.

I continued the bird stories, including one that is still close to my heart and memory. A very little bird, not long out of the egg and unable to fly, fell from the nest and hit the ground hard. My wife and children, all animal lovers, rushed to help the very upset parents. They put the little bird back in the nest and, within minutes, he fell down again and the parents were panicking. The children were more worried than the bird’s parents and, with help from their mother Indranie, put the birdie back into the nest. It fell again and, whether the parents figured that the human smell on their little one meant it was no longer theirs to protect, serve and take care of, they abandoned it. It was now ours. The ground in our yard in Antigua had more holes than an old-time shower. They were dug by giant tarantulas that came out at night, so there was no way the little bird could survive another night. This is how he became the sixth member of our family. There were Mummy, Jasmine, Zubin, Crix, and now birdie for whom I had to find a name. Forgetting for a moment that he had lost both parents, but thinking more about his being saved by my children from the spiders, he became ‘Lucky’. He brought great joy to us and, as I told the kids, he was Lucky but we were luckier still for the opportunity to enjoy him and revel in his voyages of discovery within the house and on my shoulder.

Tony Deyal was last seen remembering when his wife, Indranie, was trying to stop a Belizean bird from littering the back stairs. The bird responded angrily with “Cheep! Cheep!” and Indranie replied, “That must be my husband you’re referring to.” Send feedback to columns@gleanerjm.com