Dahlia Walker-Huntington | The ugly face of racism in America 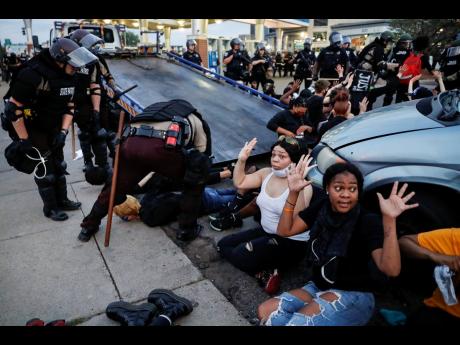 John Minchillo/ AP
Protesters raise their hands on the command of the police as they are detained prior to arrest and processing at a gas station on South Washington Street, Minneapolis, on Sunday, May 31. The protests were sparked by the death of George Floyd, who died after being restrained by Minneapolis police officers on May 25.

LAST WEEK felt different in race relations in America. It felt like a tipping point. We have been living in a state of chaos and overt racism ever since Donald Trump descended the gold escalator at Trump Towers in Manhattan in June 2015. As he declared he would run for the presidency of the United States, he blasted Mexican immigrants - he called them rapists and ‘bad people’. That was only the beginning.

Trump has led a period of unprecedented racial tensions in America. Not because racism in America has only existed since Trump became president, but because never in the modern US presidency have we had a president so open to stoking the flames of hatred and division. Whether it is between black and brown people and whites in America, or immigrants and everyone else. Trump says and tweets inflammatory statements that have served to give licence to those in America who see anyone who is not white as being inferior and unworthy.

Trump’s sentiments and rhetoric, celebrated and retweeted, have led to a number of violent attacks against non-white people all across America during his presidency. White supremacists and neo-Nazis marched on Charlottesville, Virginia, in August 2016 and Trump infamously said, “…(there) were good people on both sides”; even after one of them killed an innocent, young woman counterprotesting for the dignity of all people.

Last Tuesday, a video surfaced with a white woman in Central Park, New York, calling the police because Christian Cooper, a black man who was birdwatching, asked her to leash her dog as the rules required. The Harvard-educated black man and board member of the New York Audubon Society was told by the woman that she was going to call the police and tell them that an African American man was threatening her and her dog because he was filming their encounter. She not only did just that, but she drew down on her ‘whiteness’, raised her voice to a fearful shrill to beg the police to come now because a black man was threatening her. All the while, the man stood still and taped the entire encounter. Lucky for him, he left before the police arrived.

STARED INTO THE CAMERA

Simultaneously, another video surfaced of the murder of George Floyd, a black man, by a white police officer in Minneapolis. The police were supposedly summoned because a store owner believed that Floyd gave him a counterfeit $20 bill. The police officer held his knee on Floyd’s neck for eight minutes while the man begged for mercy, his mother and air. Despite the police’s statement that Floyd was resisting arrest, several videos showed he was compliant and that he was subdued and handcuffed during the killing. The police officer stared with impunity straight into the camera recording him, and waited almost three minutes after Floyd became unconscious to release his knee. This while three other police officers stood by, watched and did nothing.

Floyd’s murder led to protests in the streets of Minneapolis calling for justice and for the officers to be arrested. On Tuesday night, the protesters were met with teargas and, as often happens by the second and third nights of protests, they became violent. People’s anger and frustration escalated and protests turned into riots and looting.

On Friday morning, in the middle of a live report from the streets of Minneapolis, CNN reporter Omar Jiminez, a black Latino male, was arrested for no reason, and his two-member crew were arrested as an afterthought. The crew was released after approximately 90 minutes in custody. The discomfort of watching that young man’s dignity taken from him as he was handcuffed and led on the ‘perp walk of shame’ was infuriating.

Trump, in all of the upheaval, disbelief, outrage and anger throughout America since Tuesday, only found it profound to Tweet, “…when the looting starts, the shooting starts”. Not surprising because of his previous statements that police should handle suspects harshly; but disheartening because once again, Trump failed to show any empathy or leadership, and in fact inflamed the situation. On Friday afternoon, the arrest on third-degree murder and manslaughter charges was announced for the officer who held Floyd down until he died.

Last week was different because in the three incidents mentioned, even the most cynical among us could see the injustice. In other cases of racist incidents, particularly where the police were concerned, a distinction was used to push the blame on the black victim. Not. This. Time. In each of this week’s incident, it was clear that race was the factor and no blame could be laid at the feet of the victim. It was different, also, because more people began to talk about the uncomfortable topic of racism.

For most black people in America, the three incidents occurring back-to-back was exhausting, emotionally draining, and sparked anger. It also forced many in white America to see in real time what black America has been talking about for years. For many, they finally understood why Colin Kaepernick and all the ‘sons of bitches’ football players (as termed by Donald Trump) kneeled.

The outrage is a good start, but we must become more engaged than outraged. Know who your local elected officials are – your prosecutor, your county and city officials. Find a group advocating for racial justice – the NAACP, the ACLU. When it is time for an election, educate yourself and vote your interest.

Many black and brown parents have ‘The Talk’ with their black sons about complying with the police; but it is time to have ‘The Talk’ about racism with white America. Engage your white colleagues at work, at the gym, at church. It will not be comfortable, but it is absolutely necessary. We need to build allies in the white community if we ever want to see any change in this country, particularly because of the climate we find ourselves in today.

Most white Americans would not consider themselves racist, but today that is not enough. They must see themselves as anti-racist allies in order for us to get ourselves out of the construct where a white woman instinctively draws on her whiteness to make her right vs a black man – who was right.

Dahlia A. Walker-Huntington, Esq, is a Jamaican-American attorney who practices immigration law in the United States; and Family, criminal & international law in Florida. She is a mediator and former special magistrate & hearing officer in Broward County, Florida. info@walkerhuntington.com