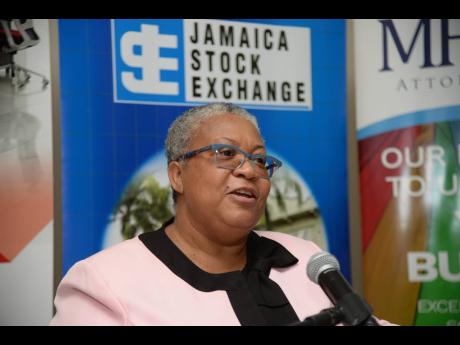 The Jamaica Stock Exchange (JSE) Group’s earnings are expected to rise despite the market index’s fall towards a near five-year low.

The expected rise in revenue will come from small tweaks in its offerings, but largely reliant on the continuation of heavy trading which boosts volume which translates to revenue for the JSE Group.

“For 2022 and beyond we will develop, upgrade and diversify,” said Managing Director Marlene Street Forest in response to questions at the exchange’s annual general meeting.

The company plans to launch short-selling, direct market access, the trading of digital assets, and Government of Jamaica securities. These initiatives were disclosed previously but are now in varying stages of implementation.

The JSE Combined Market Index, which includes the large companies on the main market and small companies on the junior market, ended trading at 376,222 points on Friday, closing out the month in decline relative to its position at the top of the year. The combined market is down by more than six per cent year to date. It is 29 per cent off the 528,300 peak on August 8, 2019, but is tracking ahead of the low point of around 337,500 points on March 25, 2020, at the onset of the pandemic.

“We are moving steadily back towards where we were in 2019, in terms of market capitalisation,” said Street Forrest on Thursday.

The market cap is meandering at or around $2 trillion. Market capitalisation outlines the total size of the market when all listed company shares are multiplied by the closing stock prices.

JSE market cap grew despite the fall in individual stock prices because the number of listings increased from 92 in 2020 to 100 at present.

Additionally, the trading volumes and value of trades are back hovering at 2019 levels, resulting in JSE Group earning $280 million in profit over six months to June compared to $190.4 million in the 2021 period.

Investors are trading despite headwinds due to new listings, but are also averaging down on previous investments in anticipation of recovery.

“We anticipate that there will be other lines of business that will come online in 2022 and in 2023, and it will redound to the benefit of shareholders,” said JSE Chairman Julian Mair at the annual meeting. “In a market that faced a pandemic and rising inflation, our programme for delivering [revenue] diversification has allowed the stock exchange to grow year to year.”

Jamaica inflation rate is hovering at 10.2 per cent, but at that level it’s twice the average targeted rate. The central bank executed another rate hike on Friday, pushing the policy interest rate up by another 50 basis points to 6.5 per cent.

Businesses have been warning that the rate hikes pose a risk to Jamaica’s economic growth, which is forecast at 2.5 to 4.5 per cent this fiscal year, and have been locking horns with the Bank of Jamaica on the issue.

The JSE Group, which includes the JSE, Jamaica Central Securities Depository and JCSD Trustee Services, said in its quarterly report that it “believes”, despite the geopolitical unrest in Eastern Europe, which will undoubtedly have some impact on the local economy, overall, this will not significantly affect its income due to its diversification strategies.

“The products are well-positioned to provide stability for shareholder income,” Mair said at the meeting.