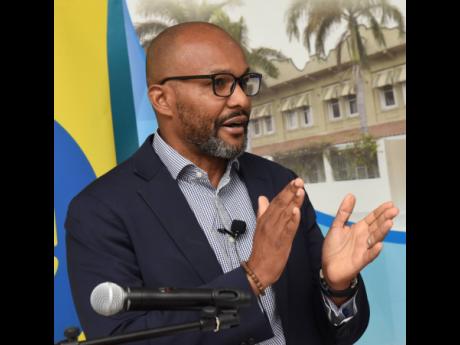 At the management level, more than half of the leadership at Victoria Mutual Investments Limited, VMIL, are women. But the numbers thin out at the board level, where only three of the eleven directorships are held by females. “We have been very...

At the management level, more than half of the leadership at Victoria Mutual Investments Limited, VMIL, are women.

But the numbers thin out at the board level, where only three of the eleven directorships are held by females.

“We have been very intentional about greater gender balance at the board level for a few years and have been diligently reviewing potential candidates,” said VMIL CEO Rezworth Burchenson.

“In late 2021, we added Bridgette Lewis to the board. This addition means that we have surpassed many of the global benchmarks.”

Aside from Lewis, the other two female directors are business consultant Sandra Shirley and VM Group Chief Financial Officer Janice McKenley. The three make up 25 per cent of the board, which aligns with the Jamaican stock market average, while the ratio of female leadership at VMIL is 55 per cent.

Burchenson said that several studies show that greater gender balance leads to more robust, balanced conversations at the board level. The Jamaican corporate sector stands to benefit from such improvement in the discourse at the highest level of organisations, he added.

VMIL in its 2021 annual report released in May of this year, indicated that it wanted to hit the 30 per cent mark for female directorships in line with the S&P 500.

On the Jamaica Stock Exchange, women hold 27 per cent of directorships in companies whose ordinary or preference stock trade on the exchange. The number of board seats last counted by the Financial Gleaner stood at 749, of which 203 are held by women. Some women hold seats across two or more companies, two of the most notable being Melanie Subratie and Sharon Donaldson. Among the near 100 companies represented on the JSE, more than 20 are managed by women, but only three are currently chaired by females: Melanie Subratie, who heads the all-female board of Stanley Motta Limited; Marion Foster – FosRich Company Limited; and Arlene Martin – iCreate Limited.

“With approximately 55 per cent of our leadership team and 25 per cent of directors being female, VMIL has demonstrated its commitment to gender equity, even whilst recognising that there is still much more to be done,” the company said in its second-quarter financial report.

“As the world evolves, we have to be mindful of our actions that may contribute to its deterioration whether it be the environment or the lifestyle of others. We must contribute to positively impact our planet and people,” Chairman Michael McMorris said.

VMIL is a boutique investment firm on a growth track through new services and accretive acquisitions.

In the June quarter, its earnings spiked from $175 million to $242.5 million. The company made more money this year on gains from investment activities than the previous year as well as more fee and commission income.

Jamaica ranks 38th globally as the nation with the highest gender equity, according to this year’s Gender Gap Report published in June by the World Economic Forum.

The female share of senior, managerial, and legislative roles in Jamaica was estimated at 56.6 per cent. The lowest ranked in the category was Pakistan with 4.5 per cent and the highest Togo with 70.1 per cent.

Civil society groups such as ‘The 51 per cent Coalition’, which started in 2011, aims to implement quotas to address the female imbalance in politics and on private- sector boards.