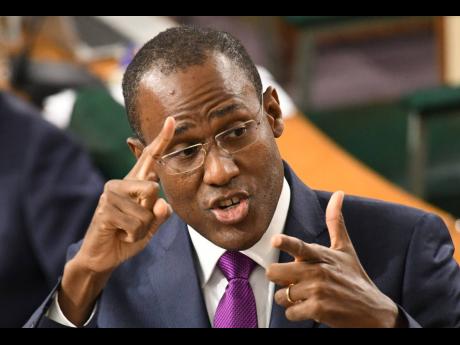 Minister of Finance and the Public Service Dr Nigel Clarke’s excellent article in last week’s Sunday Gleaner, ‘Jamaica at 60 - Taking Responsibility for Our Vulnerabilities’, was a sober, insightful, and hard-nosed analysis of the ‘key development...

Minister of Finance and the Public Service Dr Nigel Clarke’s excellent article in last week’s Sunday Gleaner, ‘Jamaica at 60 - Taking Responsibility for Our Vulnerabilities’, was a sober, insightful, and hard-nosed analysis of the ‘key development’ issues that he and his predecessors have faced during the past six decades.

He also presented a set of organising principles that he suggested should be used to guide the country’s future development.

Dr Samuel Braithwaite, lecturer in economics at The University of the West Indies, on the other hand, posed an intriguing question in his August 2 article in The Jamaica Observer that many persons, me included, have asked over the years: How did Singapore, an island of 728.6 square kilometres, without any significant natural resources, become a global financial and economic powerhouse while Jamaica, an island of 10,991 square kilometres, remains underdeveloped?

My question was posed after a five-day visit to Singapore and reading its late Prime Minister Lee Kuan Yew’s book, From Third World to First: the Singapore Story 1965-2000.

The scope of the finance minister’s article did not compare the development paths adopted by the two countries that had, to quote Dr Braithwaite, “similar levels of income per person in 1960 and, decades later, Singapore has an income per person that is more than 10 times that of Jamaica”.

Except for his references, to the “real per capita GDP of our Caribbean neighbours”, the Dominican Republic and St Lucia, which has exceeded 220 per cent and 230 per cent, respectively, since the 1970s, the finance minister’s analysis was laser focused on Jamaica. It did not mention Singapore. He used terms like economic volatility, volatility, economic shocks, vulnerability, economic vulnerabilities, resilience, and vulnerability – by my count, 25 times – to describe the economic challenges that Jamaica has and continues to face.

Economic volatility, according to Dr Clarke’s definition, is the “frequency of the turnover between growth and decline or, how often we walk forwards only to walk backwards in quick succession”. Resilience, on the other hand, means the capacity to recover quickly from difficulties; or the ability of a substance or object – or country – to spring back into shape; while the vulnerability is the state of being “exposed to the possibility of being attacked or harmed”.

The review mentioned many of the same things that Propublica writer Abrahm Lustgarten wrote about in his recent piece, ‘Barbados Resists Climate Colonialism in an Effort to Survive the Costs of Global Warming’. I also read a report last Thursday that said that over the past four decades the Arctic region has “heating up four times faster than the global average, not the commonly reported two to three times”.

Dr Clarke’s analysis of Jamaica’s economic underperformance over the last 60 years is vital to gaining an understanding of the 200-year-old insurance group, Factory Mutual, 2022 Global Resilience Index that is the subject of today’s column. The index is a data-driven tool that provides a numeric value to the resilience of 130 countries’ business environments. It was developed to provide insights that inform strategic decisions concerning a country’s vulnerability to disruptive events and its ability to recover swiftly, and to compare the vulnerability of different countries. I suspect that it is used to guide investment decisions.

The index, which is updated annually, consists of 15 drivers or measures of resilience. The drivers are equally weighted across economic, risk quality, and supply chain factors. Each factor is comprised of four core drivers. Scores are bound on a scale of zero to 100, with zero representing the lowest resilience and 100 being the highest resilience. Data are provided across five years and are sourced from institutions like the United Nations, World Bank, and International Monetary Fund, and data collected by FM Global risk engineers.

Nine Latin American and Caribbean countries are included in the index. Their overall scores and rankings are:

Singapore is ranked fourth on the global listing. Venezuela was assigned an overall score of 8.3 and ranked at 129. Denmark topped the ranking at No. 1, the world’s most resilient country, and was assigned a score of 100.

In my July 24 article, ‘Time for a SMART Disaster Risk Management Policy’, I wrote that ‘I have long felt that responsibility for disaster risk management and the Office of Disaster and Emergency Risk Management should be shifted from the local government ministry to the Ministry of Finance. In the following week, with ‘Disaster Risk Urgency and Rebellion’, I repeated my concerns. Dr Clarke’s essay in reviewing what he called the exogenous, that is, external economic shocks that have affected Jamaica since the 1970s to date, wrote that these events initiated and compounded economic volatility.

If Jamaica at 60 is to take responsibility for our vulnerabilities, the process must begin by shifting functional responsibility for disaster risk management from the local government ministry to the Ministry of Finance & Public Service.

Dr Clarke’s analysis has provided the reasoning for this. To quote him: “We have to take the exogenous realities we cannot change as given and build and maintain robustness and resilience in our economic arrangements.”

Cedric E. Stephens provides independent information and advice about the management of risks and insurance. For free information or counsel, write to: aegis@flowja.com or business@gleanerjm.com