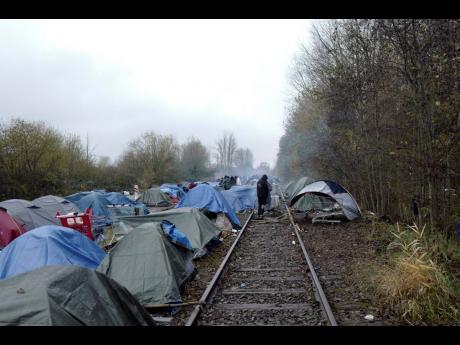 AP
A migrants makeshift camp is set up in Calais, northern France, on November 27, 2021. The UN migration agency is projecting that growth in the number of international migrants is likely to be weaker as long as travel and other restrictions remain.

The United Nations migration agency says the coronavirus pandemic appears to have accelerated “hostile rhetoric” against migrants in the world and “radically altered” mobility, projecting in a new report that travel and other COVID-19-fighting restrictions could dampen migration worldwide as long as they remain in effect.

On Wednesday, the International Organization for Migration, IOM, released its World Migration Report 2022, a vast compendium of the latest trends in human movement of all types – from people fleeing war to workers seeking jobs abroad – and a recap of the last two years of mobility. It cited the impact, for example, of a plunge in air travel last year as the pandemic was raging.

IOM pointed to a “dramatic increase” in internal displacement – movement within countries – caused by natural disasters, conflict and violence just as COVID-19 restrictions have sporadically shut borders across the globe since the pandemic emerged and spread over the last two years.

“The COVID-19 pandemic has triggered immobility worldwide to an extent unseen in recent history, slowing the pace of human mobility and migration,” said Ugochi Daniels, IOM’s deputy director general for operations, at a meeting of its member states. “The pandemic is estimated to have negatively impacted the total growth of international migrants by 2 million.”

IOM Director General Antonio Vitorino said “the pandemic also seems to have accelerated the hostile rhetoric toward migrants that has been growing in the last decade”.

“So we have devoted, in this report, a chapter on disinformation about migration,” he said. “Our research shows that debunking myth, as well as pre-bunking strategies, can help to mitigate or prevent harm caused by nefarious actors, who seek to undermine balanced discussions on migration.”

The report tallied about 281 million international migrants – not 283 million as initially expected – around the world by its latest complete count in 2020, amounting to just 3.6 per cent of the global population. That was up from 272 million in 2019. About 60 per cent of those migrants last year were migrant workers, it said.

IOM noted that migration is increasingly taking place between highly developed countries, not just from poorer countries to rich ones.

International remittances – people sending money back home – dropped to US$702 billion in 2020, compared to US$719 billion a year earlier, but marked a smaller decline than expected.

“The resilience of migrants’ international remittances has defied predictions, remaining high in 2020, with just a 2.4 per cent decline globally – and much less dire than the 20 per cent drop initially projected,” Daniels said.

The report highlighted “major migration and displacement events”, including conflicts in places like Syria, Yemen, Congo, Central African Republic and South Sudan, as well as political and economic instability like Venezuela and Afghanistan in the period. It also cited climate and weather-related displacement in places like China, the Philippines, Bangladesh, India, Haiti and the United States over the last two years.