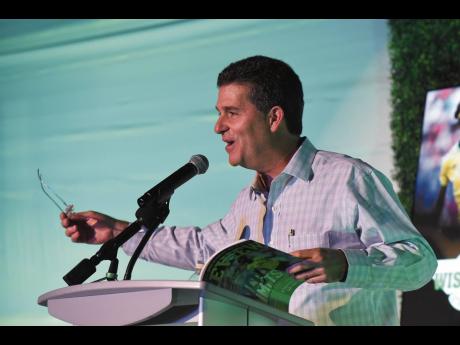 Beverage company Wisynco Group Limited doubled its cash holdings in one year, from $3.6 billion to $7.2 billion, enough to part fund acquisitions when opportunities arise over the short term, Chairman William Mahfood has said.

The additional cash is also part of the company’s arsenal in mitigating against any pandemic-related impacts, Mahfood told the Financial Gleaner.

“As the company generates the cash, it’s being used to mitigate against challenges on the horizon, but also to deploy the cash in opportunities for acquisitions, “ he said. “Finally, we are returning some of that to shareholders” in the form of dividends, he added.

The past two big deals it has done in recent years revolved under exclusive distribution arrangements and an equity stake in the company — JP Snacks, in which it acquired a 30 per cent stake for $720 million from the Jamaica Producers Group in 2019; and 50 per cent interest in Tru-Juice maker Trade Winds Citrus Limited in 2017. But Mahfood declined to comment on the type of business it is targeting this time.

“I can’t speak to that … if we were in discussions, we would be bounded by non-disclosure agreements,” he said.

Like many other local companies, Wisynco has had its own challenges from restrictions associated with the COVID-19 pandemic, the heaviest impact coming from a downturn in business among its customers in the tourism sector. Its earnings for financial year 2020 dipped by $127 million, or four per cent below that of FY 2019, but the manufacturer managed to recover lost ground at year ending June 2021.

Group earnings in the current period climbed by 9.6 per cent to $3.07 billion, or 82 cents per share, up from $2.8 billion, or 75 cents per share. The company booked a loss of $30 million contributed by associated company JP Snacks.

Wisynco Group sales dipped marginally from $32.2 billion to $31.8 billion, but managed to grow its bottom line by squeezing savings from its direct and operating costs. Within its sales mix, exports improved by 40 per cent to $628 million, but being only a fraction of revenue was not enough to offset the one per cent decline in Jamaican sales. As a drinks manufacturer, the company bottles Coke in Jamaica, as well as its own brands: Wata purified drinking water and flavoured water; and Bigga soft drinks. It also distributes a wide range of foreign and local consumer brands.

Mahfood has an optimistic outlook for the export side of Wisynco’s business, aided by the repatriation of Bigga production back to its plant in Lakes Pen, St Catherine. At the same time, he is also expressing confidence in a turnaround of local sales, particularly from the tourism sector which is slowly reviving after a total shutdown during the height of the pandemic.

“As the country tries to get back to some level of normalcy, we saw significant improve in the last quarter of the year from the hotel reopening and we hope that will continue, especially with the vaccination drive happening in the country,” Mahfood said.