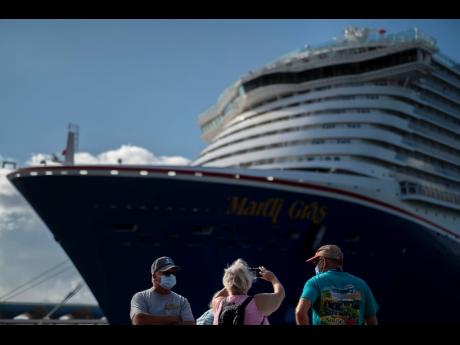 The Carnival Mardi Gras docked Tuesday in Puerto Rico – the first time a cruise ship has visited the United States territory since the pandemic began.

Some cautiously celebrated the arrival. It comes as Puerto Rico has reported an increase in COVID-19 cases blamed on the Delta variant but also as it seeks to restart its crucial tourism sector, which depended largely on record numbers of cruise ship passengers in recent years.

Carlos Mercado, executive director of Puerto Rico’s Tourism Company, told The Associated Press that the government took several precautions to prevent the spread of COVID-19, including allowing only those who are fully vaccinated to disembark.

He said the ship was traveling at 70 per cent capacity, with some 4,500 people aboard, and that he estimates a total of 3,500 will disembark. Mercado noted that 95 per cent of the ship’s passengers are vaccinated, with children younger than 12 making up the majority of those who have not been inoculated.

The visit was expected to generate some US$360,000 during the nine hours that the ship is docked in the historic part of Puerto Rico’s capital known as Old San Juan.

“This is incredibly important for us,” Mercado said, noting that Puerto Rico’s hotel and aviation sector has boomed in recent months. “This is what we were missing.”

Passengers began to trickle out of the ship to the sounds of Puerto Rico’s traditional bomba and plena music filling a nearby plaza while artisans prepared their wares and government officials distributed maps of the historic cobblestone district.

Passenger Tom Seuberling, of Oak Hill, Florida, said he was impressed by the health protocols aboard the ship.

“You had to have proof of vaccination. They got sanitation throughout the ship. They make sure that you don’t contaminate food bars. They have been very cautious about cleaning the rooms,” he said. “It has been a remarkable job.”

Mercado said the ship will dock twice more this month, generating an estimated total of US$1.2 million for August. He added that starting next month, a Royal Caribbean cruise ship will start using San Juan as its base port, and that by next year, he expects the cruise schedule to go back to normal.

Puerto Rico Governor Pedro Pierluisi said that visits of the Carnival Mardi Gras and Carnival Celebration in the next two years alone will deliver an estimated 300,000 passengers and generate some US$28 million for the island’s tourism sector, which represents nearly 7 per cent of its economy.

Some 1.9 million cruise passengers visited Puerto Rico in 2019, a record for the island, according to tourism spokeswoman Astrid Rolón.