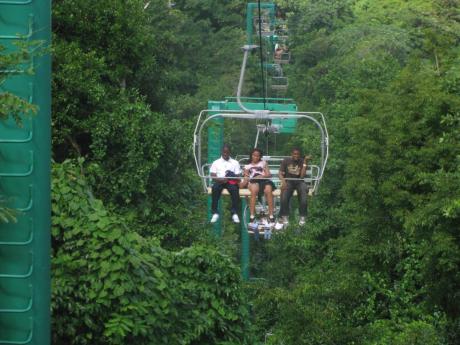 File
Persons on a ride at Mystic Mountain.

Creditors of indebted Ocho Rios attraction Mystic Mountain are scheduled to meet today in a bid to change the trustee in bankruptcy named last month by Mystic Mountain Limited, MML, as part of a proposal to settle nearly US$14 million, or...

Creditors of indebted Ocho Rios attraction Mystic Mountain are scheduled to meet today in a bid to change the trustee in bankruptcy named last month by Mystic Mountain Limited, MML, as part of a proposal to settle nearly US$14 million, or approximately $2.1 billion in debt, should the company be declared bankrupt.

Caydion Campbell of Phoenix Restructuring, Advisory & Insolvency Services Enterprise was named trustee by MML in its July 19 proposal to bondholders represented by JCSD Trustee Services Limited, who in January, called their $1.1 billion bond due in 2025 following MML’s failure to meet interest payments.

In a notice dated July 29, the August 4 meeting via Zoom was called with the single agenda item being the replacement of Campbell with Wilfred Baghaloo of PricewaterhouseCoopers Jamaica. Marlon Murdock of PwC was named as the point of contact for the bondholders intending to attend the meeting.

Murdock told the Financial Gleaner via email that PwC was the agent of Baghaloo, who is a licensed trustee under the Insolvency Act of 2014, and that a group of creditors had approached Baghaloo to act as trustee over MML.

“If appointed as the trustee, we will have responsibility to the company, its employees and all other stakeholders,” Murdock said.

The bondholders represented by JCSD Trustee are expected to be among the creditors at today’s meeting with legal representation.

MML disclosed in its debt repayment proposal to bondholders that its other creditors include Sky-High Holdings Limited, SHL, which it described as class-one creditor that would receive priority for the settlement of their US$1.7 million debt in the event of liquidation. While SHL was described by MML as being “affiliated with the Sandals Group of Companies”, information from SHL has clarified that the company is an entirely separate legal entity with no relationship to the hotel chain. Sandals Group chairman Adam Stewart is a director of SHL.

Director of SHL Ian Haynes confirmed that the company is a registered creditor of MML and would be represented at today’s meeting. He declined to comment on SHL’s position on the proposal to replace the MML trustee.

Sygnus Capital and Josef Wiegand are also listed by MML as being among a group classified as class 4 creditors, who are owned a total of US$3 million, inclusive of trade payables. From its accounts, MML also owes US$872,000 in redundancy and severance pay and well as taxes and employers’ contributions to the Jamaican Government.

Meanwhile, the JCSD Trustee-represented bondholders, who took the initial insolvency action against MML, are said to be still mulling the company’s proposal, which was amended following a meeting of the bondholders over the past week. The changes made to the proposal were not ascertained.

In its July 19 proposal, MML offered to settle its $1.2 billion debt representing principal and interest to JCSD Trustee bondholders by August 27 this year with what it said is a loan being negotiated with an unnamed financial institution.

The amount of the bank loan being sought was also not specified, but MML said additional funding was being arranged by its majority shareholder. The MML parent company is St Lucia-registered Karibukai Limited, in which Rainforest Adventure Holdings is the majority shareholder.

A creditors meeting via videoconferencing was proposed for August 9 by MML to discuss a possible revised payment schedule.

Showing that it has been making efforts to become current in servicing its bond, the MML directors in their proposal, noted that on June 30 it made a $19.6 million payment to bondholders representing a quarterly interest payment according to the original bond payment schedule. The company has requested a waiver for a remaining $38.8 million in interest payments to be deemed payable in a revised payment schedule.

The MML directors said they were also taking steps to address its insolvency by establishing an escrow account into which the majority shareholder of the parent company had already deposited US$1.1 million.

MML, in its proposal, made the case for a resolution to the impasse outside of winding up the operations noting that in the event of a structured sale of the assets packaged en bloc as a turnkey operation, there would be a “modest” realisation of 57 per cent of the book value of assets. In a worst-case scenario of a distressed or forced sale of the business as a turnkey operation, it said, only 30 per cent of the book value of the assets would be realised.

MML also suggested that an estimated winding up time period of between 12 and 24 months would not be in the interest if the creditors.

Additionally, MML has pointed out that in a winding up and asset sale, a new class of creditors would be due approximately US$1.7 million and would have to be paid as a priority. Redundancy payments of US$500,000, it notes, would also have to be settled before the main legacy bondholders, believed to comprise mainly pensions funds represented by JCSD, could be paid.