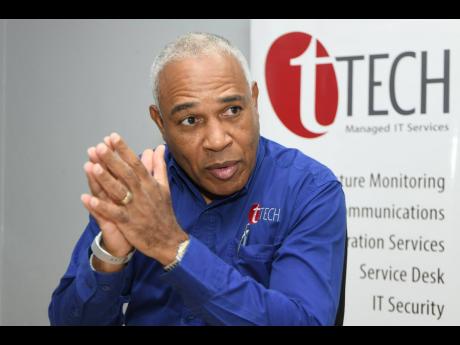 GraceKennedy Limited began stepping up its programme to digitally transform the group from last year, having poured US$25 million into its tech infrastructure in the past five, and now it’s gone further to bring an expert on board. But...

GraceKennedy Limited began stepping up its programme to digitally transform the group from last year, having poured US$25 million into its tech infrastructure in the past five, and now it’s gone further to bring an expert on board.

But GraceKennedy, a food and financial services conglomerate with global tentacles, hasn’t hired its own techie. In an unusual move, it has made an arrangement with technology service provider tTech Limited to borrow its technical services manager.

It’s how members of a family of companies would be expected to operate, but tTech the firm has no membership in the GK group, although the two are connected sentimentally.

On Monday, tTech said in a market filing that Omar Bell had been seconded to GraceKennedy for three years, starting May 3. Logistically, it doesn’t hurt that tTech operates from Harbour Street, Kingston, a stone’s throw away from GK’s headquarters.

GraceKennedy CEO Don Wehby says Bell has gained critical insights into the conglomerate’s operating environment over the years, and so was ideal to be onboarded from the company’s technology partner to lead all areas of GK’s IT development and operations.

“GraceKennedy is continuously improving our IT infrastructure, which is key to our company’s growth, particularly as we expand our digital transformation strategy. As our digital channels grow, we must ensure that we have a robust platform to accommodate these channels,” Wehby said on Tuesday in response to queries by the Financial Gleaner. “Building capacity for the growth of our digital offerings is vital,” he said, while noting that the tech investments by the company has averaged US$5 million in the past five years.

This capacity building for growth was flagged by Wehby as a core part of Bell’s focus. The conglomerate is into food manufacturing and trading, banking, remittance, currency trading and cambio operations, investments, insurance and payment services, among other businesses. One of the promising areas that the pandemic laid bare was online remittances.

“There are a few major projects in the pipeline to upgrade our core application and improve overall efficiency,” Wehby added, without elaborating.

tTech CEO Christopher Reckord shed some more light on what appeared an oddity – given the rarity of this staffing arrangement among private-sector firms that aren’t connected through shared ownership ¬ saying, given the ongoing and long-term business arrangement between the companies, there is an understanding not to hire talent from each other, while supporting opportunities for staff development that might arise involving an exchange of talent. This arrangement is part of the contract with other long-term clients, Reckord said.

To fill the gap created by the secondment, tTech executive director Norman Chen will temporarily switch from his current duties overseeing sales to head up IT services management, while other staff will move to sales, with supervisory input from Reckord.

“Over the next three months, we will be doing some assessment. During the pandemic period there were some hiring that we didn’t do, so we will now look at who we will hire and redeploy,” the CEO said.

In terms of the pandemic effect, he noted that while tTech did lose some business as a result of the shuttering of the hospitality sector, with a resulting fall-off in revenues and profits in some months last year, the business has held firm, generally, with an uptick in revenue from $340 million to $359 million in 2020, while profit slipped by two million to $22 million.

The company’s performance was sturdy in the March 2021 first quarter, with profit doubling from $4 million to $8 million, and revenue climbing 10 per cent to $96 million.

The managed IT service provider began operations in 2006 when its founder and company chairman, Edward Alexander, left GraceKennedy as head of GK USA and group chief information officer to start the venture. Alexander is the son of former GraceKennedy CEO and Chairman, the late Carlton Alexander, who worked with the food and financial services group for 50 years, having started as a stock clerk in 1933.

GraceKennedy was an early client of tTech’s, and its various businesses in Jamaica and overseas, which together generate more than a $100 billion annually in revenue, are among the tech service provider’s core long-term clients. The GK Pension Plan is an investor in the tech firm.