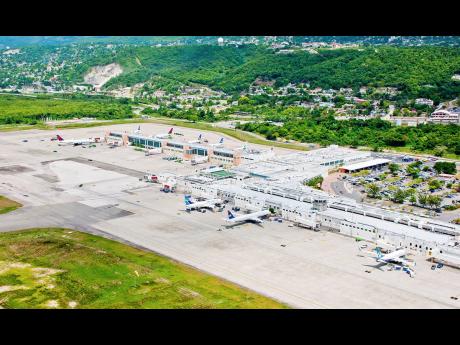 The Mexican operator of Jamaica’s two largest international airports says it has presented to the government what it calls “rebalancing proposals” for the economic recovery of the operations in Montego Bay and Kingston. Pacific Airport Group, GAP...

The Mexican operator of Jamaica’s two largest international airports says it has presented to the government what it calls “rebalancing proposals” for the economic recovery of the operations in Montego Bay and Kingston.

Pacific Airport Group, GAP, has suffered huge revenue losses arising from the collapse of international travel under the pandemic, and is seeking the time extension on some of its mandatory capital development spending for Sangster International and Norman Manley International, NMIA, as stipulated in its operating contracts.

In its December 2020 financial results, the company, which also operates 12 airports in its home country, said the Jamaican government will be reviewing its proposal during this year, but did not give a timeline on when a decision is expected from the authorities.

At the same time, GAP, whose name in Spanish is Grupo Aeroportuario del Pacífico, said it had concluded an extraordinary review of its current capital development programme with the Mexican Aeronautical Authority and secured a deferral of investments for a period of 20 months in that country.

Pressing ahead with Sangster upgrade

Minister of Transport Robert Montague acknowledged receipt of the proposals on Thursday, saying Cabinet has decided to set up an “enterprise team” to review the applications from GAP subsidiaries MBJ Airports Limited and PAC Kingston Airports Limited, or PACKAL. The team will be assisted by consultants with expertise in infrastructure, aviation and finance, Montague told the Financial Gleaner, but did not disclose a timeline for the review.

GAP reported late last year that in relation to Jamaica’s largest airport, Sangster International, it was pressing ahead with some of its US$112-million, five-year capital spending commitments to 2024, plus other infrastructure works, while seeking to delay its over US$100-million mandatory capital fix for NMIA in the nation’s capital.

Montego Bay-based Sangster is an older concession operated by MBJ Airports since 2003, while the NMIA concession is less than two years old and run through wholly owned subsidiary PACKAL, since October 2019. The Mexican firm owns 74.5 per cent of MBJ, with Canada’s Vantage Airport Group owning 25.5 per cent.

The passenger fall-off in the resort city was a whopping 66 per cent last year, from 4.7 million to 1.6 million. For the last three months of the year, passenger throughput fell to 285,500 from one million in the last quarter of 2019.

In Kingston, GAP saw 408,700 passengers between October and December 2019, a figure that fell to 133,700 during the fourth quarter last year. For the full year, NMIA processed 629,400 passengers. Revenues there also fell significantly in the fourth quarter of 2020 over the comparative period in 2019, when GAP took control of the facility.

Across GAP’s international network, passenger numbers tumbled 43 per cent, from 48.7 million to 27.3 million, and with it, group revenue slumped nearly 30 per cent, from US$786 million in 2019 to US$572 million last year.

Despite the revenue and passenger plunge, GAP, which is listed on the Mexican and New York stock exchanges, grew its assets by 23.5 per cent to US$2.5 billion, up from US$2 billion in 2019.

With some US$100 million in bank loans, the company has been pushing through infrastructure works in Montego Bay, banking on a major revival in tourist travel there after the COVID-19 pandemic.

In 2018, MBJ said a US$40-million makeover there was being done with loan financing secured in 2017 from Scotiabank Jamaica. The company returned to Scotiabank late last year to borrow another US$60 million to fund more capital development projects and for general corporate purposes.

In January this year, GAP disclosed in its fourth-quarter results that the group repaid US$95.5 million in maturing loans to Scotiabank.

Despite the still heavy spending in Montego Bay, MBJ Airport CEO Shane Munroe said late last year that some aspects of the capital programme there were being shelved until passenger numbers recover.

GAP officials have previously said the Kingston upgrade delay is not an abandonment of the company’s contractual obligations in the capital city.

“We have just started negotiations with the government, but I can share that PACKAL is committed to honouring all that we offered before COVID,” CEO Fernando Vistrain Lorence said last November.