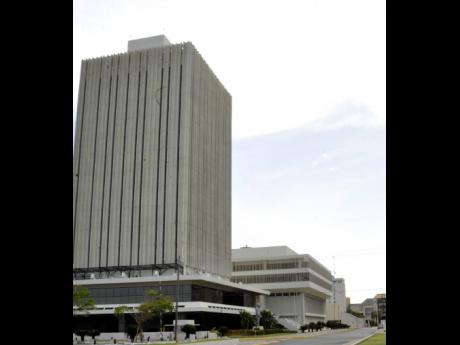 The Bank of Jamaica (BOJ) continues to signal confidence in the country’s financial system, and its resilience throughout the ongoing health crisis, but is keeping watch on the health and strength of the loan books in the banking system. Large...

The Bank of Jamaica (BOJ) continues to signal confidence in the country’s financial system, and its resilience throughout the ongoing health crisis, but is keeping watch on the health and strength of the loan books in the banking system.

Large financial holding companies have also agreed to continue delaying dividends to around mid-year in an extension of an agreement last March that was to run for about a year.

Giving his quarterly take on the state of the economy, its performance over the past three months and outlook for the future, BOJ Governor Richard Byles said on Friday said that while the domestic financial system has been impacted by the pandemic, it remained resilient and sound.

The central bank is also painting a picture of optimism for the broader economy, hanging its bullish outlook on the coming rollout of the vaccination programme that the Government now says will cover two million Jamaicans, the containment of community spread of the coronavirus here, and a successful inoculation programme in the country’s major tourism source market of the United States.

“Deposit-taking institutions’ balance sheets indicate they are well capitalised and in compliance with prudent liquidity standards. Loan quality for the system, while naturally showing a small deterioration, remains well below our threshold,” Byles said during the bank’s quarterly press conference.

He noted, however, that the banking regulator was keeping a watchful eye on the resolution of what he described as a substantial block of loans on moratorium. Central bank officials did not elaborate on the loans in question or indicate what steps would be taken to ensure that there is no fallout should the loans become impaired.

At the same time, the central bank reported that loan growth has remained “fairly resilient” with the stock of private sector loans and advances recording year-on-year growth of 11.5 per cent at November 2020 compared to growth of 16.5 per cent at February 2020.

Bank officials say that liquidity support to the banking system since the start of the pandemic in March last year amounts to over US$1 billion or about 8.6 per cent of GDP, while Jamaican dollar liquidity is well over $70 billion or four per cent of GDP. This level of support has come through a variety of interventions. The foreign currency support, Byles noted, is the BOJ’s net input as the central bank has also been buying hard currency from the market.

And while financial institutions have not had to draw down on some support made available to them by the central bank, including emergency funding arrangements, the facilities remain open to the deposit taker, or DTIs, supervised by the BOJ without any cap for the period of the pandemic, the central bank has said.

“We do not operate with a global ceiling. We monitor the current economic conditions and prospects and we tailor liquidity needs and the flow of liquidity in the system accordingly. As it is now, we think that the level of liquidity in the system is sufficient to support the economy during this period,” BOJ Senior Deputy Governor Dr Wayne Robinson explained, responding to queries from the Financial Gleaner.

An agreement between the BOJ, financial holding companies and DTIs for only limited dividend distributions during this period, continues to hold. In December, this understanding was extended, the BOJ noted, with the DTIs agreeing not to declare or pay any dividends over the next two quarters until June 2021.

Inflows into the foreign exchange market have remained healthy, the central bankers reported, with daily purchases of US dollars by authorised dealers and cambios from end users averaging US$31.2 million daily since the pandemic to January of this year, slightly lower than the average of US$33.4 million recorded for 2020.

Daily sales to end users averaged US$27.7 million in the same period, slightly lower than the average of US$29 million a year earlier, according to figures shared by the BOJ governor on Friday.

The central bank officials say the economy is beginning to show green shoots of recovery, even though they remain cautious in the face of much uncertainty about the future and the duration of the pandemic.

Statin reported a 10.7 per cent contraction in GDP for the September 2020 quarter, but this was an improvement relative to the prior quarter, ending June, which saw a significant contraction of 18.4 per cent.

He pointed to the same pattern of improvement in the labour market, with the unemployment rate rising to 12.9 per cent in July 2020, but falling back to 10.7 per cent in the October jobs survey.

Concluding that the contraction in the Jamaican economy is past its worst, the BOJ outlook is for continued improvements in economic activity, if even more gradually. The central bank is forecasting a 10 to 12 per cent contraction in real GDP for the current fiscal year, ending March 2021, but is looking towards “a partial rebound of at least 4 per cent in economic activity” or possibly “as high as 8 per cent, if there is a strong recovery in tourism,” said the BOJ governor, with reference to the upcoming 2021/22 fiscal period.

This outlook, Byles said, is hinged on a strong recovery in tourism tied to successful vaccination programme in source markets and the control of community spread of COVID-19 in Jamaica.