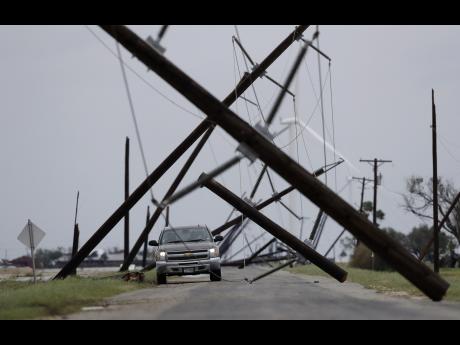 AP
A driver works his way through a maze of fallen utility poles damaged in the wake of Hurricane Harvey, Saturday, August 26, 2017, in Taft, Texas.

Flood damage from Harvey is likely to reach into the tens of billions and the storm is expected to cause south Texas’ economy to shrink, at least in the near term.

Harvey is swamping refineries along the Gulf Coast, leading to higher gasolene prices. Gasolene futures were up 4 per cent on Monday morning after rising 7 per cent in premarket trading.

The storm could also put a kink in the shipment of consumer goods.

Harvey, which hit the coast as a Category 4 hurricane, will likely affect the South Texas economy for months. Mark Zandi, chief economist at Moody's Analytics, predicted that the region's economic output will be cut about 1 per cent, or US$7 billion to US$8 billion. It will recover, he said, helped by money from insurance payments and government aid to rebuild.

Refining Prices are expected to spike over the next week or more as about 10 refineries representing more than 15 per cent of the nation's refining capacity are shut down.

When water recedes, prices will fall more slowly than after other storms that hit the refinery-rich Gulf Coast, like Hurricane Ike in 2008, said Rick Joswick, an analyst with S&P Global Platts' PIRA Energy.

Nearly 3 million barrels of the 18 million United States daily refining capacity has been knocked out. Most of the shutdowns have been precautionary, with only a few reports of minor flooding.

But the slow-moving nature of the storm means it could cause shutdowns to linger and leave more lasting damage, said Goldman Sachs analyst Damien Courvalin. Another 850,000 barrels per day of capacity remains under threat, he said.

Exxon Mobil closed its huge Baytown refinery, which lies along the Houston Ship Channel, 25 miles east of the city. The plant can handle up to 584,000 barrels of oil per day. It turns that into gasolene and chemicals used in everything from shrink wrap to car tyres.

Several other refineries closed, including a Royal Dutch Shell plant along the ship channel, and several in Corpus Christi, Texas, that are operated by Valero Energy, Citgo and Flint Hills Resources.

Houston's two big airports are expected to remain closed to all but relief flights until later this week, as runways were flooded and roadways in and out were under water and at times impassable.

More than 1,600 flights on Monday were cancelled, the bulk of them at Bush Intercontinental Airport and Hobby Airport, according to tracking service FlightAware.com.

Bush Intercontinental, a hub for United Airlines, isn't expected to reopen until Thursday, according to the Federal Aviation Administration. United flew in a Boeing 777 with relief supplies on Sunday and used it to take 300 customers to Chicago, said spokesman Charles Hobart. Two similar flights were planned for Monday, he said.

Southwest Airlines operated five emergency flights from Hobby Airport to Dallas on Sunday to pick up nearly 500 passengers who had been stranded, a spokeswoman said. The airport is expected to remain shut down until Wednesday, the FAA said.

CORRECTION: This story has been updated to correct the refining capacity of the United States.