Charting the history of The Lay Magistrates’ Association of Jamaica 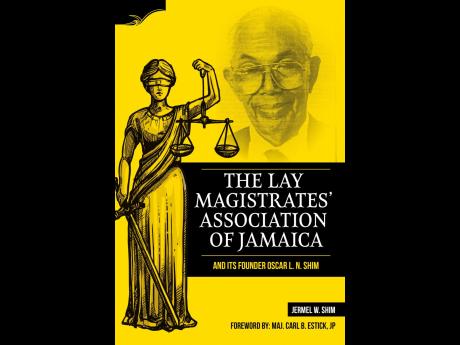 Carefully interweaving stories about the life of an organisation in tandem with the life of an interesting human being, Jermel Shim presents his latest publication, The Lay Magistrates’ Association of Jamaica and its Founder Oscar L.N. Shim.

Newly published (July 2021) by Pelican Publishers in Kingston, Jamaica, this 248-page book is written in an easy-to-read, relatable style with a hint of academic/ scholarly influence, as the topic demands such. Drawing on historical facts and records presented by primary sources, including his father, the author weaves a highly informative and captivating tale about a topic which too many Jamaicans take for granted and know very little about. Of such an important, long-standing organisation, the typical person only knows that JPs (justices of the peace) are necessary when it is time to sign important documents. This publication lifts the veil and presents relevant information about the history, work and purpose of the lay magistracy, so anyone who has an interest can learn more.

The book becomes even more absorbing as the life of Oscar Shim, founder of the Lay Magistrates’ Association of Jamaica (LMAJ), unfolds through the pages. His journey is decidedly one of a ‘seeker’ who placed himself in the right place at the right time and was able to create an important legacy. He lived a full life, a giving life and was celebrated for it in life and death. The author, as his child and an established writer of five books ( The Long Road to Progress for Jamaica, Whom God Has Blessed Let No Man Curse, Racism in America, and A New Perspective on Racial Job Discrimination in Corporate American Companies), was more than up to the task to further the legacy by writing this book.

Readers will be quite taken by the various images and perfectly placed letters and other mementos the author artfully includes in the publication, breaking up what could have, under other circumstances, just been a mundane presentation about a corporate entity. And, as with any other well written story, it is not without a bit of controversy. The author has not shied away from including the good, some of the bad, and even a bit of ugly. Thankfully, there is very little of the latter, but any truthful exposition on the life of such a long-standing organisation must include some isms and schisms, as such is human nature.

The author dives deep into the life of the LMAJ presenting their rich heritage of events, awards, and other notable contributions to society. He also used the medium to clearly articulate his opinion, include recommendations and advise and call upon the extant powers that be to carefully consider fulfilling unfulfilled dreams and wishes of the founder – his father - for the betterment of the organisation. Notwithstanding, he manages to come across as not being too pushy or biased, without having to outline that he speaks from the outside and not as an authority within the entity.

The book comes at a time when the organisation itself is mired in controversy – not by its own doing, but almost as a victim of external forces who may feel somewhat threatened by its existence and influence. This publication may just shed some light on the continued importance of the role of such an organisation in the lives of the Jamaican people at large and the people whom it serves in particular.

In conclusion, Jermel Shim’s The Lay Magistrates’ Association of Jamaica and its Founder Oscar L.N. Shim, is undoubtedly a timely publication which bridges a gap in a rather important area by presenting this unique body of knowledge. Even the appendices and other supporting information were well chosen and should not be overlooked. Readers will find themselves nodding vigorously at times in complete agreement or wrinkling their brows as they contemplate a point which they never previously thought about or were aware of. But, at the end, it is highly unlikely they will put away this book and think, “Such a pity, my time would have been better served doing something else.”

The Lay Magistrates’ Association of Jamaica and its Founder Oscar L.N. Shim is available at Kingston Bookshop and Amazon.com in Kindle and paperback format.