East: Ready to fight for my place 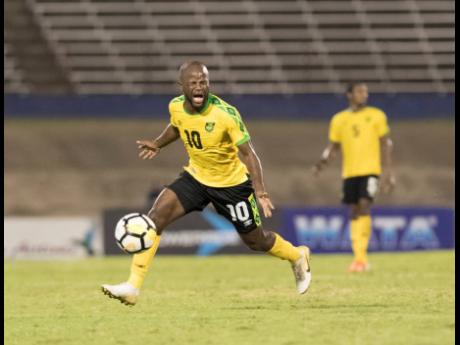 File
Jamaica’s Javon East reacts to a call by the referee in the Jamaica vs Aruba match during the Concacaf Nations League at the National Stadium in Kingston, Jamaica, on Saturday, October 12, 2019.

With the Jamaica Football Federation (JFF) reportedly set to acquire the services of several English-based footballers ahead of this year’s Gold Cup tournament and World Cup Qualifiers, national senior striker Javon East said he is confident that...

With the Jamaica Football Federation (JFF) reportedly set to acquire the services of several English-based footballers ahead of this year’s Gold Cup tournament and World Cup Qualifiers, national senior striker Javon East said he is confident that he will be able to retain his spot in the team.

West Ham’s striker Michail Antonio and Watford’s forward Andre Gray are among players that the JFF have recruited to boost the Reggae Boyz’s front line ahead of this year’s tournaments.

Antonio turned down the chance to represent Jamaica in 2016 and was later called up to England squads by Sam Allardyce and Gareth Southgate but did not make his debut.

He is now expected to accept Jamaica’s latest approach in a bid to play at the 2022 World Cup, after being repeatedly snubbed for England game-time. Gray is set to represent the country once he is granted his Jamaican passport.

East, who last scored for the Reggae Boyz in their 3-1 away victory over Saudi Arabia last November, told The Sunday Gleaner that he will not be fazed by the addition of these players, adding that he is prepared to do his job whenever he gets his opportunity.

“Once I get the chance to start or be in the team, I will have to do the job whether it is (Michail) Antonio, Shamar (Nicholson), Andre Gray or anybody else,” said East.

“Whenever the coach calls on me, I just have to deliver. I’m not worried about who is there and who is playing, I am just there to do what I have to do, and if the coach says I am ready, then I am ready to give it my all for the country,” he said.

“We are not here to pick the team, we are there to work as a team, and whatever the coach’s decision is on who will be playing, we have to work with it,” East said.

GEL AS A UNIT

The 25-year-old East, who currently plies his trade for Santos De Guaplies in the Costa Rican top league, underscored that the addition of the overseas-based players will certainly add a lot more depth and quality to the Reggae Boyz squad. He also stated that the team must gel quickly in order to achieve its main objectives, which are to win the Gold Cup and qualify for the 2022 World Cup in Qatar.

“The depth will be good for the team because we will have a lot of matches to play, and so it is just for us to gel as an unit and to ensure that we get the desired results that will be required to get us to where we want to be,” East said.

East has netted seven goals in 11 games in Costa Rica this season.