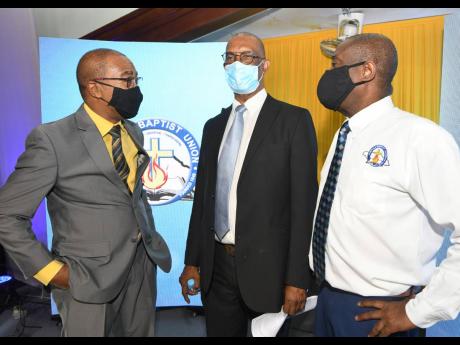 A lack of moral vision and practice accounted for neglect among Jamaica’s poor and underserved, according to the Reverend Dr Garnett Roper, who, yesterday, said that the COVID-19 pandemic has provided litmus paper to “make visible and palpable the demarcations of the inequality within the society”.

Delivering the Jamaica Baptist Union’s 171st General Assembly Convention Lecture on the topic ‘Moral Vision and Moral Practice in the Public Square: Imperative or Impediment – A Christian Perspective’, Roper argued that any focus on morality in recent times has raised questions about integrity and credibility as those who shout the loudest have been found wanting on the front lines when moral courage is required.

“They have reduced moral struggles to certain pet issues like abortion and the rights of the LGBTQ community,” he said.

Roper, who is a past president of the Jamaica Theological Seminary, reasoned that those who have eyes for those issues have no eyes for the more vexed moral consideration of existential issues such as social exclusion and debilitating social conditions, which often result in a high incidence of crime and violence.

He highlighted that because of the pandemic, the Government now knows that 55 per cent of households do not have access to the Internet or devices to participate in virtual learning.

Often when Jamaica is put on the map internationally, it has been by persons from underserved communities, he further noted.

Roper said this is not intended to reinforce social inequality, but to illustrate that Jamaica could do better if policies of social and economic inclusion are pursued.

“The moral vision that emerges from the Bible is one in pursuit of equality, dignity, and the humanity of the people by ensuring access to the basic necessities that are essential to their quality of life,” he said, using Micah 4:4 as reference.

Using the zones of special operations to illustrate his point, Roper pointed to data that between 2017 and 2018, the police detained 582 persons – including 40 children – in Mount Salem, St James, but only one was criminally charged.

“The assumption in the society is that in order to make us safe, the police have a right – or ought to have an option – to take away the freedom of persons who live in these places,” he said, adding that Jamaica is unlikely to succeed at a moral vision without affirming common humanity as a community.