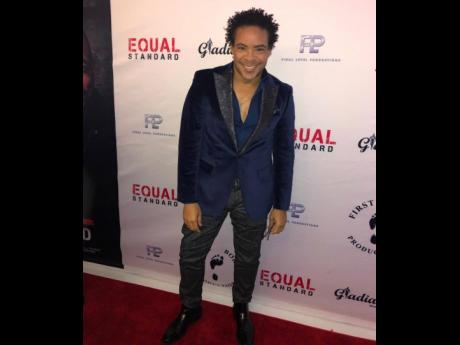 When award-winning Jamaican actor David Heron speaks of the late Frederick ‘Toots’ Hibbert, it’s hard to believe that the two have never met. Having not met Toots is a regret for Heron, who described the legendary musician as one of his all-time favourite artistes. When Hibbert passed away back in September, the actor said he was devastated. Reminiscing on his musical memories of the 54-46 singer, Heron said he was thinking of ways to honour the reggae veteran when a perfectly golden opportunity for him to do just that landed in his lap.

Heron, who is also a playwright, is the voice of a Rolling Stone podcast, paying tribute to the Jamaican reggae legend and Grammy Award-winning musician.

“I never met him (Toots); I really wanted to. I only ever saw him perform once in my life, and it was when they used to have the Air Jamaica Jazz and Blues festival, and I went with my family one year. It was the year Dionne Warrick and Julio Iglesias was on. Toots tore the place down. I was right up front, close to the stage, and I will never forget that night. It was the only time I ever saw him perform live, and it was very special,” he said.

Heron said Toots was an important figure for him while living overseas, his music helping him to stay connected to home. “I started to appreciate him (Toots) a lot more when I left Jamaica and began living in the United States. When you are a Jamaican living abroad, there are certain images, certain voices, certain sounds and songs that when you come across them, they instantly transport you back to yaad in a very clear and specific way and give you that joy that makes you break out in goose pimples, and it can be a very simple thing,” he recalled.

“When I moved to the US, and I no longer had a Jamaican radio to listen to all the time, he was one of those artistes who the mere sound of his voice and certain songs would take me back home. The song that always did it for me was Sweet and Dandy. I have a very specific memory of being extremely young, wearing short khaki pants, being in my backyard, sitting on a step and eating a mango and Sweet and Dandy was playing on a little radio. That memory is etched in my mind, and so I have a very sentimental streak for Toots,” said Heron

Heron said that when Toots died last year, although they had never officially met, the singer had become such a massive part of his life that he wanted to honour his memory but struggled to develop something that fit his iconic status. “I was devastated, and doing this project devastated me more because I knew that Toots was a man in his 70s who was in remarkable shape, and so when I heard that he had COVID and he wasn’t doing well, I never thought that we would lose him. I just thought that a man as strong as him, who kept himself in such immaculate shape, would pull through,” he said.

He added: “In the aftermath of Toots’ passing, I had been searching within myself, trying to figure out how I could pay tribute to such an icon. I am glad that I got the opportunity to do the Rolling Stone project. I gave it everything I had because this is my tribute to a legend. I learnt so much about Toots, not just the artiste, but the man he was. He was so well-loved, so appreciated, so respected.”

Heron said that when people lose loved ones during COVID, public-gathering restrictions and curfews can put a damper on the celebration of life. He said the latter played a significant part in how Hibbert was ultimately honoured following his passing. Although the world did its best under the circumstances via numerous virtual celebrations, he wished the pandemic was not in play so that Toots could have got the huge send-off he deserved.

“When you lose someone during COVID, whether it’s as a result of COVID itself or other reasons, an additional tragedy that befalls the person is that because of the social distancing restrictions, you can’t get to mourn them and give them their due as we would love, and that in itself is heartbreaking. We couldn’t get to celebrate the icon he was like he should have been celebrated. Still, I am honoured and grateful to have been selected to narrate this project, one that salutes his legendary status and honours his legacy.”

A Reggae King Rises Again is available for listening on Rolling Stone’s website.