After displaying much consistency in the early rounds, which was dominated by Japan’s Yaad Beat Sound and nine-time champion, Jamaica’s Pink Panther, Warrior Sound had a good fourth round, which landed it in the final. Once in that round, the German sound sizzled in the 10-song dub-for-dub face-off with Pink Panther.

Pink Panther took a 1-0 lead after unleashing a monster dub from singer Richie Stephens, which had the crowd going wild. However, Warrior Sound bounced back to make it 1-1 and drew level with a Johnny Osbourne’s classic, Dub Plate Playing in the Ghetto Tonight.

Once they drew level, Warrior Sound never looked back, drawing heavily on dubs from Barrington Levy and Coco Tea to win the next five rounds, which gave it an comprehensive 6-1 win.

“I have been preparing for months and months and months and spent money upon money to prepare for this clash,” said an elated Ruebenstruck, after collecting his trophy. “Having this trophy in my hand as the winner of the Reggae Sumfest Global Sound Clash winner is almost unreal, is the biggest and best thing that has ever happened to me in my 15 years in music.” 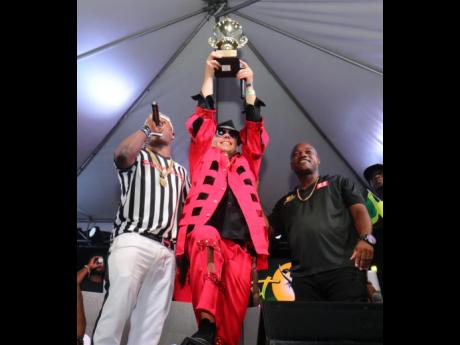 The first sound to really get the crowd moving was Yard Beat Sound, which looked the sound to beat after dominating rounds one and two. The Japanese sound also shared the spoils in the third round with Pink Panther. However, they had a below par fourth round and controversially missed out on making the final as many felt they got a better crowd response than Pink Panther.

Ricky Trooper, who started out slowly in the first round, never really recovered. It was not surprising that he was the first selector to be eliminated, as although he came wrapped up in a Jamaica flag, he failed to get the required love from the predominantly local crowd.

However, in the finals, once Warrior Sound drew level at 1-1 with Pink Panther, it was basically a done deal as the fans were captivated by witty ‘intros’ backed up with pulsating dubplates, which Pink Panther had no answer for.

“I knew I had the songs to win but coming up against seasoned professionals like Ricky Trooper and Pink Panther, I knew it would not be easy,” said Ruebenstruck. “I am now a part of dancehall’s history and it makes me very happy and proud.”